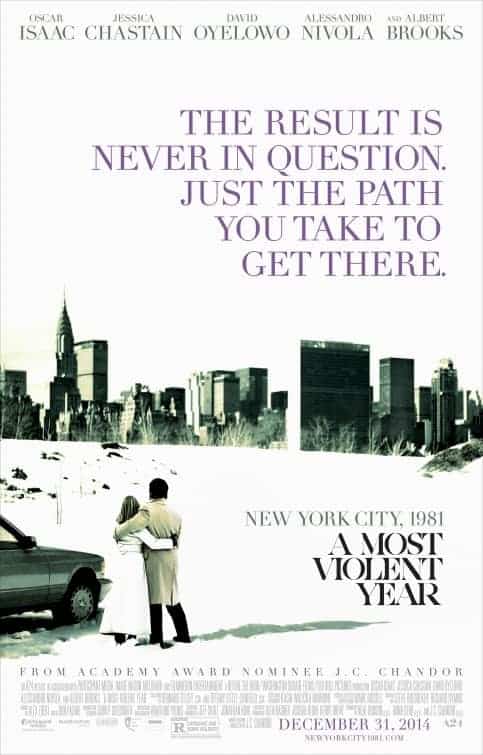 “Just when I thought I was out, they pull me back in!”

In Francis Ford Coppola’s The Godfather Part III, Michael Corleone succinctly sums up how hard it is for a criminal to go legit. No matter how hard you try to escape that world, it will always be over your shoulder. In that sweeping crime saga, audiences knew what Corleone was involved in and can easily understand how hard it is to gain legitimacy. However, what if you were never in it in the first place and were merely guilty by association? That is just one dilemma of many that writer/director J.C. Chandor explores in his understated yet potent crime drama, A Most Violent Year.

In the winter of 1981 in New York City, violence and crime is rampant throughout the city. Corruption is prevalent, and the criminal underworld’s fingers touch just about everything. Abel Morales (Oscar Isaac), an ambitious immigrant and businessman, seeks to expand his business and wants to do it legitimately. He and his wife, Anna (Jessica Chastain), place a substantial investment into a business venture where they will have 30 days to prove their worth or lose it all. However, forces both internally and externally mount that continue to put that deadline and their livelihood in extreme jeopardy.

J.C. Chandor, director of Margin Call and All Is Lost, has written and directed a well-made, slow-burn crime drama that harkens back to similar films made in the ’70s and ’80s. The film almost feels like it was based on a true story. It moves along at its own, sometimes dry, pace and plays out quite realistically. Going in, one may expect your stereotypical gangster film, but while it may have recognizable tropes, it never unfolds like one.

There are many moments in this film that, in other directors’ hands, would likely be over the top and clichéd, but Chandor presents them in a matter-of-fact and understated fashion. Like his previous films, Chandor has also written some engaging and memorable characters. A couple in crime, or non-crime, of such power and potency likely hasn’t graced the silver screen since Ray Liotta and Lorraine Bracco in Martin Scorsese’s Goodfellas. There may have been others, but they’re the first to come to mind. The film is populated by so many characters of dubious intent that you often wonder just who you can even trust in this world.

Oscar Isaac stars as Abel Morales, and he effectively plays a man driven by honor and respect but knows the trappings of the world he lives in and really conveys the struggle he faces to do the right thing. Jessica Chastain is excellent as his mob-connected wife, Anna. She’s a woman who loves and supports her husband but wishes he would be more assertive in situations, likely attributable to the fact that she is very much her father’s daughter. Separately they are strong, but together they are a force to be reckoned with. Albert Brooks co-stars as their attorney, Andrew Walsh. He is quite good in a role that can almost pass as the film’s comic relief, but the comedy doesn’t come from slapstick but from the surprisingly humorous side of bleak situations.

This is a subtle-but-impactful, deliberately paced crime drama that will keep your interest as you wait to see just what will happen in the end. It does start slowly but gradually builds to its quiet but satisfying conclusion. While not as strong as his previous directorial efforts, Chandor’s latest certainly ranks among some of the best crime dramas in recent memory.