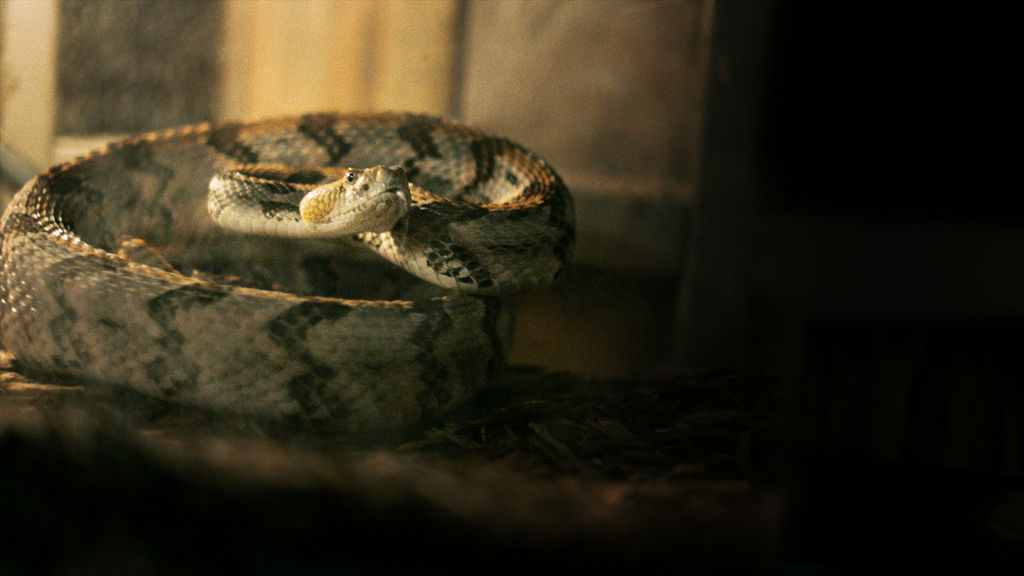 The crime odyssey of Glen Summerford in the fall of 1991 is one of those “stranger than fiction” cases that accordingly has risen to the esteem of modern-day folklore in the Appalachians, where it had occurred.

Marred by uncertainties and spread through word of mouth, the story of the former Pentecostal priest and divine “snake handler” who attempted to murder his wife, Darlene, using the tools of his esoteric trade (i.e. the venomous rattlesnakes he parades in front of his congregation) is one of those true-crime stories that doesn’t travel too far outside of the sleepy city of Scottsboro, Alabama, where it went down. That’s usually chalked up to the Appalachians being misaligned and unfairly perceived, like an entirely separate world unto itself by those unwilling to dig deeper into it where the population “handles things” their own way away from prying eyes.

Producer-director Theo Love has taken it upon himself to crack open the case of Summerford, to truly hash out the details once and for all, to dispel the mythical status it has within the region it transpired, and to reverse its largely unknown status outside of the region. Breaking the case into five chapters of varying detail, Alabama Snake probes the case in a pragmatic and informative manner that attempts (and occasionally fails) to avoid the sensationalist potential of the particulars, which include Glen’s backstory, his supposed redemption in the eyes of God and his work as a minister/“miracle worker”/evangelist.

The film divides its time between several perspectives: the factual details on public record from the crime and trial, Dr. Thomas Burton’s investigation into the case and his interviews with Glen for his own book on the case, his side of the fateful night, and his wife Darlene’s side.

Much like the lucrative true-crime event of this year that was The Tiger King series on Netflix, the more Love uncovers in his exploration the more bizarre, muddy and outlandish the story becomes to the point where the likes of demon possession, illegal pit fighting and incest become unfortunate sub-stories.

Alabama Snake lives and dies by the details (and whatever devil may lie within them), and for that reason, it is an interesting case; yet it’s only a serviceable film. Hoping that the inherent sensational aspects of a case would carry a film has worked out with other such media of this ilk (chief among them being the bevy of Netflix series and films like Don’t F**k With Cats, The Staircase, Evil Genius and the aforementioned Big Cat guy), but in Love’s film, the execution is rather dry.

Despite the film’s best efforts in the form of some well shot but tonally clashing dramatizations and fantasy sequences, the case itself clearly does not have the longevity of other similar “weird crime stories” to keep the viewer invested beyond the initial shock of its premise. While nobody can fault the film for not being thorough or well researched, Alabama Snake just feels like a missed opportunity outside of that all-important weird factor, which is never properly captured.

Perhaps, if the film was more invested in taking a perspective on Summerford story, like from an anthropological standpoint by investigating the geographic area more thoroughly or from a religious standpoint by really sinking its teeth into “snake handling” in Christianity (pardon the pun), then maybe this film could feel like it stands out among the crowd. As a recitation of the facts or a summary of Burton’s book, Serpent And The Spirit: Glenn Summerford’s Story, the film itself is informative and serviceable but ultimately forgettable in a sea of similarly themed and produced true-crime documentaries.

If anything, Alabama Snake proves we have yet to reckon with streaming services’ long-term effect on the true-crime documentary genre. What started with Netflix saturating the market with easily digestible and indistinguishable docs that its subscribers would voraciously devour one after the other has perhaps made the genre stale and overrun with “content” more than actual films.

The hook has always been the oddness of the crime, and it keeps feeling like the genre is suffering a creative draught, despite the abundance of films, series and podcasts on the market. Alabama Snake is a great story with a cookie-cutter presentation, and more than likely it will get swallowed by a market where there is never a shortage for films just like it.