Paramount has released the trailer for Alexandre Aja‘s upcoming horror film Crawl, in which a father and daughter find themselves trapped in a crawl space after a  hurricane traps them. To make matters worse, there’s a group of hungry alligators waiting for them to emerge. The film is produced by Sam Raimi and stars Kaya Scodelario and Barry Pepper.

When a massive hurricane hits her Florida hometown, Haley (Kaya Scodelario) ignores evacuation orders to search for her missing father (Barry Pepper). Finding him gravely injured in the crawl space of their family home, the two become trapped by quickly encroaching floodwaters. As time runs out to escape the strengthening storm, Haley and her father discover that the rising water level is the least of their fears. From director Alexandre Aja (The Hills Have Eyes) and producers Craig Flores (300), Sam Raimi (Don’t Breathe, Evil Dead) and Alexandre Aja, Crawl is a nail-biting horror thriller in theatres July 12, 2019. 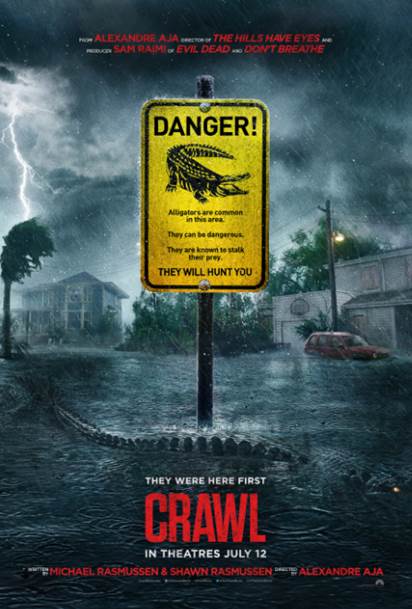