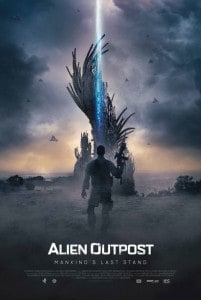 In 2021, Earth is invaded by an alien force. The combat goes on globally for several years until 2023 when the “Heavies,” as they became known, are driven off the planet. The enemy force, in such a hurry to depart, leave some of their own soldiers behind. Over the next 10 years, the USDF (United Space Defense Force), an international army established to fight the threat, eliminate the remaining Heavies.

This is the setup for Jabbar Raisani’s feature directorial debut, Alien Outpost. The story begins in the year 2033 in the DMZ between Pakistan and Afghanistan, Outpost 37, which has been seeing quite a lot of combat. The soldiers have been seeing attacks from both Heavies and locals, who are not thrilled that the USDF is still entrenched in their sovereignty. Two journalists arriving at Outpost 37 with a small detail of soldiers are on hand to document the events.

Right off the bat, this film has two possible strikes against it. First off, because the events are being documented by journalists, it means this is yet another shaky-cam, found-footage flick. Secondly, it’s a documentary that takes place in the future. The latter seems to be more of challenge for the filmmakers because, if viewers don’t at least buy into this concept, then the film has already lost. To the credit of screenwriters Raisani and Blake Clifton, as well as to Raisani’s direction, the film does not collapse under the weight of those conceits.

With respect to the found-footage issue, the documentary is being shot by professional journalists, so even the shaky-cam moments are relatively well framed and steady. In terms of the documentary angle, once you realize this is a mockumentary, it does take a moment to warm up to the idea. But as events unfold, you become more and more interested in how it all ends.

While Raisani and company were able to overcome the found-footage and mockumentary issues, the film is populated by fairly stereotypical grunts, characters you never really become invested in, despite their intimate interview segments peppered throughout the film. I suppose that can be forgiven, considering the story isn’t real, but it would have gone a long way if they were able to create real flesh-and-blood characters.

While the filmmakers may not have created “real” human characters, they did a pretty solid job of creating the alien Heavies. These aliens aren’t going to be turning any heads nor breaking any molds, but they are pretty effective. The film builds up the Heavies through soldiers’ accounts, news footage and other means, but we don’t actually see one until about halfway into the film. Yet they live up to the hype.

For a science-fiction action film, this is not as effects heavy as one would expect. Needless to say, one should not anticipate destruction on the level of, say, Battle: Los Angeles or Independence Day, but thanks to Raisani’s background in visual effects, he knows how to milk every one and zero for all their worth. Raisani’s approach was more about the story and less about the visual effects.

There appears to be use of both CGI and practical effects, especially when it comes to a Heavy that is taken into custody. Raisani never really provides a money shot of his aliens, so you have a general idea of what they look like but never really get a close-up look. For some that may be deemed a cop-out, but for this viewer, it was an interesting choice.

Alien Outpost turned out to be better than I expected. Going in, you’ll likely expect some sci-fi-level schlock, but it is far from that. The film features some interesting ideas, a compelling story and decent combat sequences. While the characters are a bit stereotypical, the story is engaging enough to keep you watching and wondering just how it’s going to unfold. It does have an air of familiarity to it, but in the end, it doesn’t hamper any possible enjoyment. As a documentary it’s pretty informative and enlightening as it lays out the history of Outpost 37, and thanks to a post-credit sequence, it looks like their story continues.