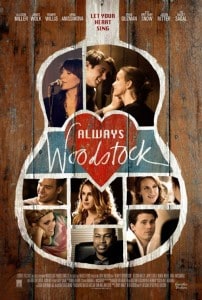 Catherine (Allison Miller) is having a rough go of it. She’s stuck in a soulless job at a big record label that favors fame over talent; she’s in a dead-end relationship with an actor who cares more for his own image than anything else; and she can’t seem to get her singer-songwriter career off the ground. To make matters worse (I guess?), she gets fired from said crappy job and discovers her said crappy boyfriend is cheating on her.

Her BFF tells her to get away for a while and focus on getting in the right headspace, so Catherine decides to move back into her childhood home in Woodstock, which has been left vacant since her parents passed away. What she doesn’t know, but what everyone else is painfully aware of, is that she is about to have a life-changing experience that will completely turn her life around forever.

After one day in her new home, she gets a little too tipsy at the bar and meets Noah (James Wolk), a handsome doctor who takes care of her and becomes the new love interest in her life. She also meets Emily (Rumer Willis), the free spirit. How do we know she’s a free spirit? We learn this from the closeup of a no smoking sign followed by a cut to her lighting one up. Then the shop owner across the street begins yelling at her about her beautiful yet misunderstood street art she displayed on his window.

If all this sounds slightly typical, it’s because Always Woodstock may be the most typical romantic comedy I’ve seen in the last decade. It’s actually hard to overstate this — and trust me, I am trying. The characters are one-dimensional and bland; the story beats can be seen a mile away; and the comedy just simply isn’t very comedic. This movie is the reason the rom-com sub-genre gets a bad wrap, and this film is so awfully typical it’s offensive.

The mediocrity of this film begins to set in once the truly cringe-worthy and all too perfectly manicured dinner scene begins. This is when Catherine realizes she’s found her people and begins falling for Noah simultaneously. This is also when the film’s musical aspect begins to rear its head.

Because this takes place in Woodstock and the lead is an aspiring folk singer, of course there has to be a musical angle; and while Miller’s talents as a vocalist aren’t half bad, all the songs are terribly generic and forgettable. Not only does Always Woodstock tackle the tricky and rare subject of relationships, but it also acts as a statement on the modern music industry and the corporatization of art

This is an insufferable movie that telegraphs everything from its opening minutes, and does nothing to elevate the genre or even tell an interesting story. It’s competently shot and acted, but that’s about as much as I can say.

How ironic that a film that relies so heavily on the characters making true art and not selling out can feel so uninspired and unoriginal.