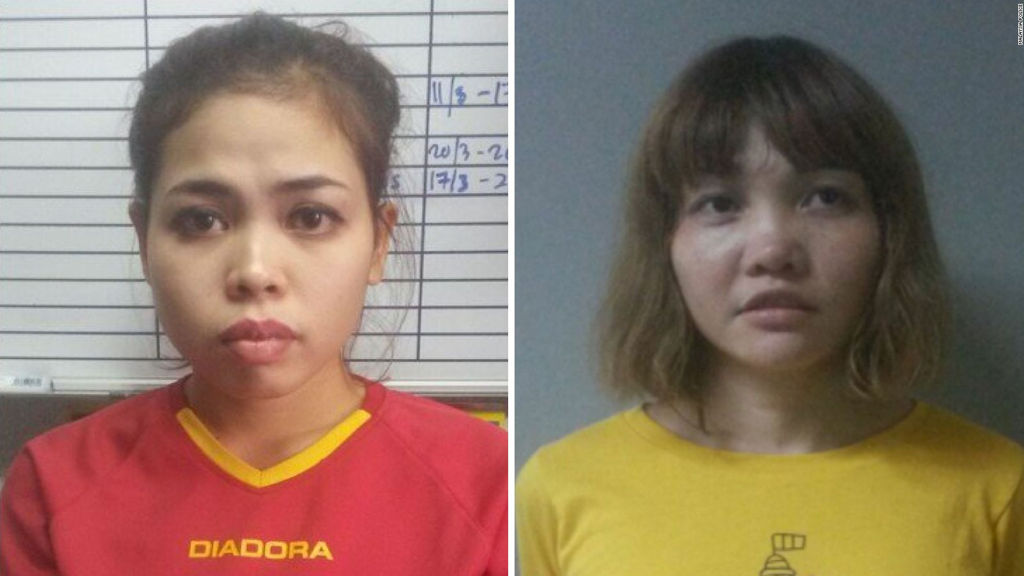 The assassination of former heir apparent to the role of Supreme Leader of North Korea, Kim Jong-nam is probably the only time in the history of the world where the legal defense can be summaraized as, “It was just a prank, bro.”

Two Millennial women, an Indonesian single mother and a Vietnamese aspiring model – none of whom had ever met each other before this fateful day – assassinated the half-brother of North Korean leader Kim Jong-un at Kuala Lumpur International Airport in Malaysia with one of the most deadly nerve agents known to humankind. When they were apprehended and charged with the murder of one of the nation’s most powerful individuals in exile, they explained they were just participating in a stunt for an online prank show, had no idea who their “target” was, and believed the deadly VX chemical compound that they slathered onto hisface, resulting in Kim Jong-nam’s death hours later, was indeed baby oil. Their trial and sentencing took two years, and they were let go without a single charge pressed.

This bizarre chapter in modern political intrigue is the subject of Ryan White’s thorough and informative documentary, Assassins, which went through this case with a fine comb as it was unfolding. Casting a wide net over the incident, Assassins thoughtfully probes the layers of this case with an even hand and clear intention, striving to understand the ins, outs and possible motivations behind this strange case of political assassination.

While its central position is to explore the lives of Siti Aisyah and Doan Thị Hương and the series of innocuous events that led them to causing an international incident, the film also intricately explores the political situation behind this case and how it is seen as the first step in presenting Kim Jon-un’s solidification of power in North Korea. White wisely divides his time between both the speculation of the larger potential plot and the known facts concerning the trial, looking to journalists who cover North Korea for input behind Kim Jong-un’s possible hand in this plot and Hương’s and Aisyah’s legal defenses and families to offer proper portraits of the pawns.

The film is frankly at its best when it zeroes in on the life experiences of these two Millennial women and traces their paths and how they may have crossed with an apparent cabal of conspirators working for the North Korean government. Prying open the case as the film does, Assassins revels in the strange details of the case, how far the two women were manipulated and how efficient the setup was. Through interviews with the accused, we get a very sympathetic and revealing portrait of the struggles of these two women who are living and working as immigrants in Malaysia and come to understand how easily they could be duped into performing such a shocking act without realization.

The film is hesitant to condemn or poke fun at the case, given that the reported premise – a “Japanese/Chinese viral YouTube company” paying them to perform fake, candid-camera-style public pranks, only for them to neglect to realize they assassinated a son of Kim Jong-il – are absurd to the point of farce. Rather than sensationalizing the already ludicrous details, Assassins genuinely feels like it wants to understand how this moment in our modern political landscape, where a YouTube prank show “gone awry” helped form the iron fist of power for one dictator, came about.

Assassins is the preeminent documentary on this subject and can transform a passing interest in this story into an earnest desire to know every detail, but the mileage you get out of White’s film is linked to how interested in the case you are. It’s informative and thorough (in that academic way, where all angles are covered), and if you don’t find this assassination from three years ago interesting, it could possibly lose you while it deftly puts all the pieces together.