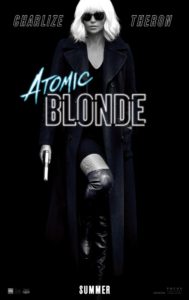 It is undeniable and unavoidable that Cold War espionage thriller Atomic Blonde will forever be forced in comparison with the more popular cultural force that was John Wick. With carrying the same director in David Leitch (though uncredited on the Reeves picture) and promising to fulfill the action film niche of “singular-bad-ass-rampage,” Charlize Theron’s stylized beatdowns set against the backdrop of the Berlin Wall collapse will tragically live in another renegade’s shadow. A true shame because, frankly, Leitch’s Atomic Blonde is quite capable of being a disappointing and convoluted muddle without the unwarranted similarities to Keanu’s canine crusader.

Leitch approaches his graphic-novel source material by deliberately placing his flashy anarchist stylings in direct mano-a-mano conflict with his needlessly overwrought substance attempting to tie it all together. Framed as a deliberation for special agent Lorraine Broughton’s botched mission to retrieve a MacGuffin in the form of an index of double agents that could “prolong the Cold War another decade,” Atomic Blonde partakes in loosely stringing its audience along through vague espionage events all while promising a conspicuous action scene is right around every corner. As a whole the film suffers from thinking it is more clever than it is and thus never really earning the twists its plot interjects or the narrative layers it attempts to prop up over its historical backing. 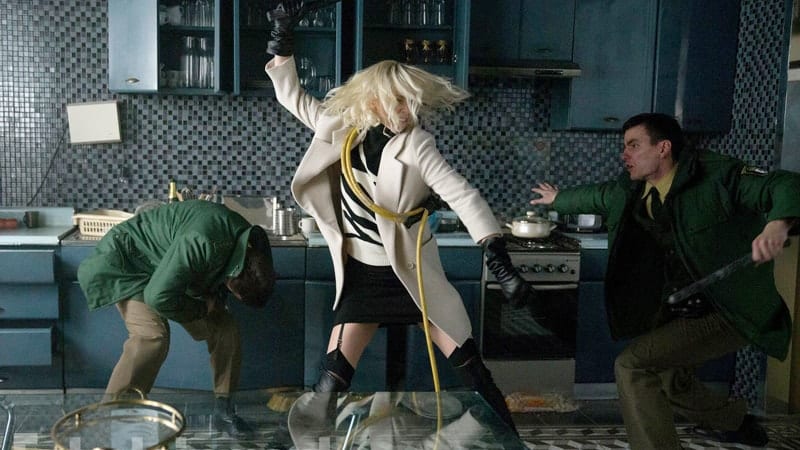 Whilst getting in touch with numerous contacts on both sides of the Wall and outlining a serpentine web, including the likes of James McAvoy, Sofia Boutella and John Goodman in appreciated supporting roles, Theron proves capable of holding up the film as its centerpiece, if a little stilted by unclear directions. As Leitch wills it, Broughton has two setting of operation: as a breathy affectless ice sculpture meant to be gazed upon or a grit-teethed weapon of imperturbable skill.

Her performance of stone-faced seriousness, while appropriate for the material, is at odds with the glitzy aesthetic the film routinely attempts to interpose, reminding me of a similar fatal flaw that plagued the atrocious Suicide Squad film. The flamboyant punk-rock presentation clashes uncomfortably with the stoic bleakness of the action and atmosphere taking itself too sternly.

This is more the fault of Leitch than Theron because, as a formal stylist, he reveals himself to be the type of director who makes aesthetic decisions based on whether or not he thinks they look “cool.” Atomic Blonde is an inconsistent flourish of eye-catching content, which – as the film endures – becomes more disparaging as Leitch gets more ambitious. Take, for example, the film’s focal action set piece of an extended long-take fight scene up and down the stairs of an abandoned hotel. While enthralling in theory, in practice, it’s limply choreographed, overly long and gritty in a manner that cannot be found anywhere else in the film. Much like most of his technical decision, Leitch proves uninterested in justifying his decisions.

While the action in much of the film can be impressive and exhilarating, if you’ve seen one melee scored to New German wave music you’ve really expended the depths of the film’s creativity. Atomic Blonde very much wants to be taken as a fist-first ride through the graffiti-soaked streets of Berlin, but its own bloated plot and needlessly cold presentation stop it from ever really taking off in the fun department. Leitch has an undeniable talent for shooting action, and Theron has gravitas here where another actor would be laughably miscast. This film, however, is forever stuck in another film’s shadow, unsure of what it wanted to be in the first place.