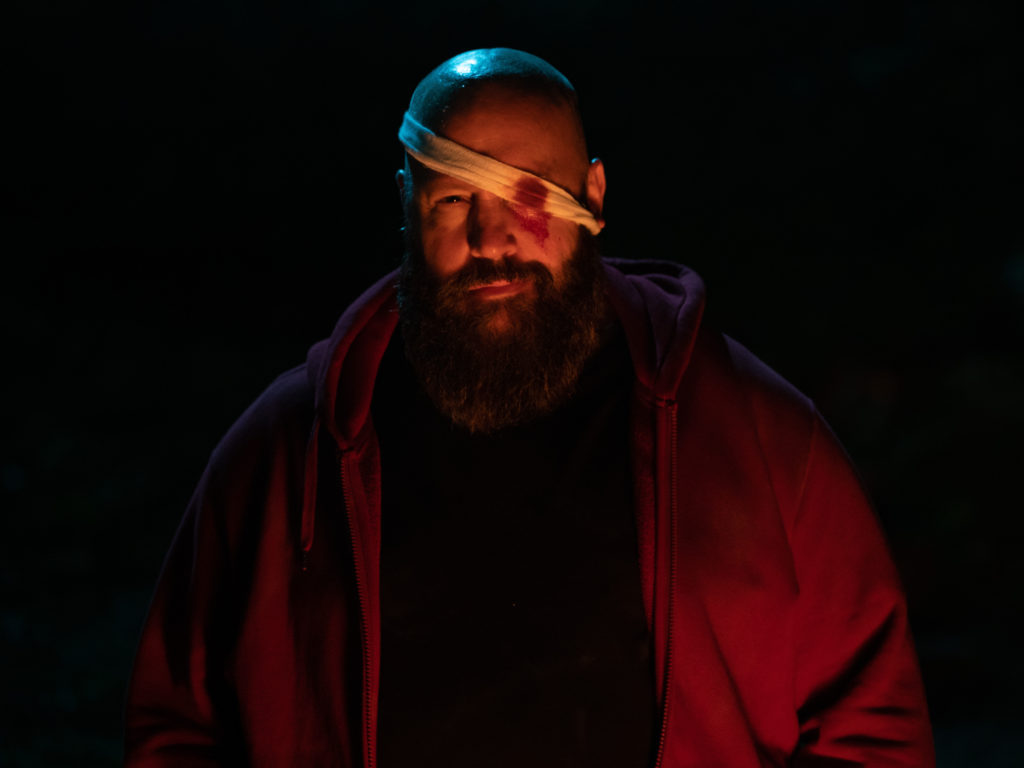 The main reason why many might endeavor to seek out this middling revenge thriller from the directing duo who brought you Bushwick is unquestionably its distracting stunt casting of Kevin James. The perennial Adam Sandler underling has yet to challenge his acting prowess beyond the litany of loveable oafs that has sustained his career since his sitcom days and with good reason.

The bumbling bumpkins in the likes of Paul Blart and…others…have allowed the passable funnyman to sustain his career years past its expiration date. So when the soft-faced James shows up in Becky as the sadistic leader of a murderous Nazi gang, you can’t help but wonder why this was the role to finally make his dramatic debut.

The titular Becky (Lulu Wilson) is the classically troubled teenager, as her denim, shoplifting and slightly colored hair will clue you into. Her petty teen rebellion was emboldened by the loss of her mother to a cancer diagnosis and her father’s (Joel McHale) sudden decision to remarry and bring two new members into their family (Amanda Brugel and Isaiah Rockcliffe).

The vacation to their isolated luxury home in the sticks, where her father was meant to break the news of his marriage, is interrupted by the arrival of a band of recently escaped Nazi convicts (led by a baldheaded James with multiple Nazi tattoos crisscrossing his temple), who seek a key left on the property. How did it get there? What does it open? Why are James and his gang of rough-and-tumble white supremacists willing to murder everyone in their paths to get ahold of it? The film never really tells us.

When Becky becomes separated from the family, she dons a knitted fox toque and begins the massacre of the her Nazi terrorizers, disposing of them with such ease that you wonder where the tension was meant to come from. Outsmarting and out-murdering the supposed criminal mastermind in James (even taking his eye in a hilariously sub-par effect), the gravitas of this 15-year-old reaching this apparent breaking point and being capable of such acts of excessive violence is never drawn upon or set up in the script or Jonathan Milott and Cary Murnion’s direction. With little hesitation and little believability, Becky becomes a Rambo-like figure capable of toying with and torturing her pursuers who I will remind you are supposed to be hardened criminals.

And yes there is James, whose role as Dominick the Nazi mastermind also never wades into the realm of believability. Even with him peppering his dialogue with curses and the occasional cheap monologue about racial purity, James as an actor is inherently soft spoken, making his attempts at being intimidating utterly ineffectual.

Even with the script’s noted use of the clichéd horror setup of being isolated in the wilderness and far removed from civilized society, James just cannot rise to the occasion of striking terror with this material, no matter how supposedly cruel his actions get. Equally unfortunate is his constantly being outsmarted by a child in what would play well as a premise for one of his upcoming Netflix-exclusive comedies (sans the Nazism and murder of course).

The distractive stunt casting and lackluster performances gets Becky off on the wrong foot, but that is far from the only problem. It’s script is cliché ridden; it’s tone is confused, and its pacing is uncomfortably fast tracked, making the sudden shifts to ultra violence all the more numbing. Honestly, the casting of James as the big-bad Nazi was rightfully the thing to publicize in this film, because otherwise it does not have a lot to offer.