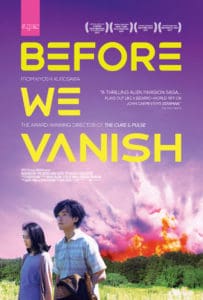 Kiyoshi Kurosawa’s Before We Vanish begins with a familiar image that can be found multiple times throughout his extensive oeuvre. A teenager, wearing a blood-splattered sailor school uniform, stands over the disemboweled remnants of what was, at one time, her family as she cracks a smile and wanders off.

Though this tableau would not be uncommon starting point for one of his many J-horror films, the late-career Kurosawa chose this gruesome scene to open his second foray into science fiction, after 2013’s Real, about body-snatching alien lifeforms. Brief as this bullet point may be, its stark outcropping from the rest of the film epitomizes the problem that Before We Vanish faces, that being one of identity.

Kurosawa purposely gets heady with his alien invasion angle by couching it in a fundamental exploration of cognitive semantics. Shinji’s race of parasitic extraterrestrials have ventured to Earth to wipe out all traces of humanity but not before their emissaries, who use stolen bodies to walk among us, can relieve us of our abstract conceptions. 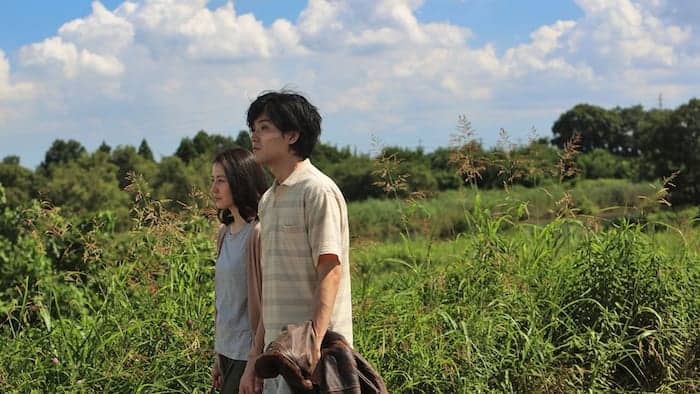 The process is simple for such an obtuse idea; they get one of us to picture a concept, be it “work” or “family” or “possession,” and then they pluck it from the confines of our minds, meaning they then fully comprehend it, and their victim no longer can. As alien invasions in fiction go, where the options range from the completely destructive War of the Worlds style and the gradual replacement Body Snatcher style, Kurosawa has conceptualized a fascinating bend to the sci-fi trope that allows him to wax philosophically on the restrictiveness of conceptual thinking. The emissaries learn more about the complexities of humanity and how they employ semantics in their lives while leaving psychological ruin to the ones from whom they steal.

Through the stolen body of Shinji and his patient wife, who is along for the ride, the aliens could be seen as liberators as they free us from the ideological confines into which our conceptions force us. As the more lighthearted and humorous side of the film, it plays as a soft, fish-out-of-water tale, as the newly hosted Shinji must rebuild his understanding of the world through his victims.

Like an eccentric romcom, Narumi protects Shinji from his own lack of understanding as he gradually takes concepts along the way as he (or the alien embodying him) becomes a more thoughtful husband in the process. The comedy is imponderous and the romance decently parsed, but Kurosawa plays this side of his story much too straight-faced for any of the natural quirkiness of the situation to bubble to the surface. 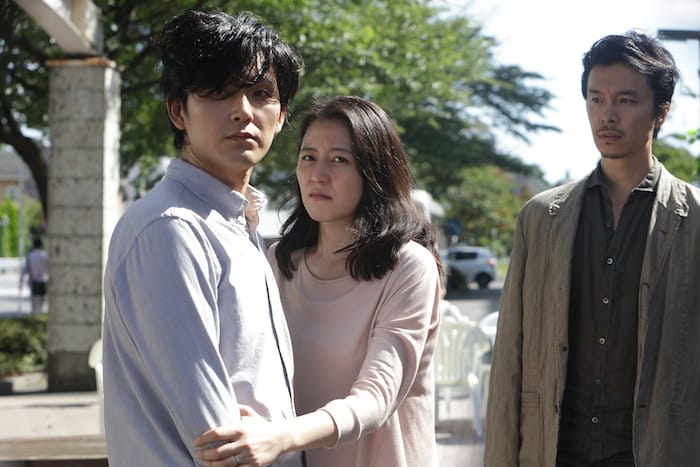 Coupled with his methodical and disciplined direction, this side of Kurosawa’s script is airy but pleasant and only makes the discrepancy from the other side more incongruous. As it would have it, the other two emissaries are already well along in their harvesting of concepts and have begun constructing a communicator to trigger the invasion. This side of the story has Kurosawa dipping his toe into more severe territories, as the aliens inhabiting the teenage bodies of Akira and Amano are ruthlessly fixated on humanity’s extinction.

Enlisting a predatory gossip journalist as their “guide,” they run from the encroaching authorities and government and freely dispose of their roadblocks in sudden spurts of intense violence. These moments serve as brutal jolts to the system when the other half of Before We Vanish is projecting an almost E.T.-level of wholesomeness in how it approaches the same invasion. The action and paranoia of these progenitors of Earth’s destruction are much more in tune with its director’s past cynicism, but assembled in this film, lack potency or purpose.

In a retrospective sense, it departs significantly from Kurosawa’s other tension-deprived, apocalyptic exercise in Pulse, where the potential end of the world was welcomed with a cynical acceptance of existence’s very transience in a newly digital age. When Before We Vanish leads into its zero-hour, it spouts an overly sincere message of hope for humanity’s redemption, which, while severely predictable and familiar for an invasion story, is unencumbered and straightforward in a manner we see from this director whenever he can pull himself away from the bindings of the horror genre. 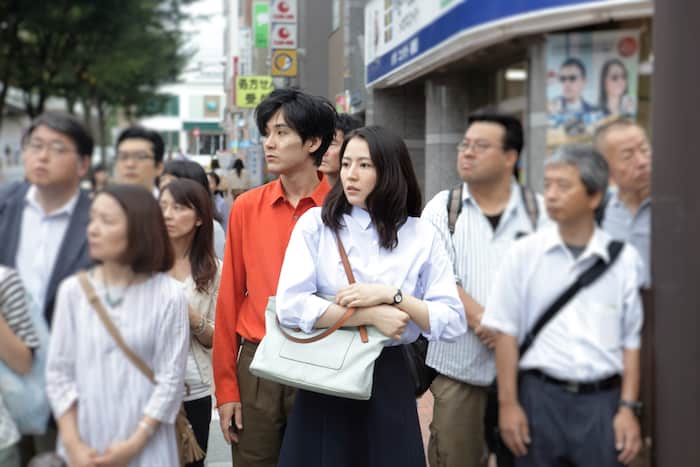 It’s the moving climax of Shinji and Narumi’s journey that dismisses much of the problems that appear when the alternate journey of Akira and Amano grate against it. If you somehow guessed the culmination of their story involves taking the concept of “love” and are currently rolling your eyes, I implore you to reconsider because the film handles this tired path with a respectable honesty, holding it up as the only logical conclusion to its weird musings on humanity’s sense of itself. It works without feeling cheap or hackneyed, and it swings so broadly that even someone like myself, who enjoys this director at his most brooding, can be moved emotionally.

The sheer scope of Before We Vanish’s vision is admirable, but attempting to make the disparate pieces of that vision coalesce does not pan out properly. Stitching together a paranoid thriller, apocalyptic science fiction and an off-kilter romantic comedy makes the film a curiosity worth engaging but disrupts any hope of the film having a sense of flow to its shifting tones and moods.

It should be emphasized that the elements corralled together are strong in their own rights, and if Kurosawa could have shored up the dragging run time necessary to cover his juxtapositions, Before We Vanish could have been a much more promising endeavor. What he does accomplish here is suitably bizarre enough to keep you engaged while he unpacks his light philosophical hangups about humanity at the end times, and that’s enough for me.

One Response to “BEFORE WE VANISH Review”