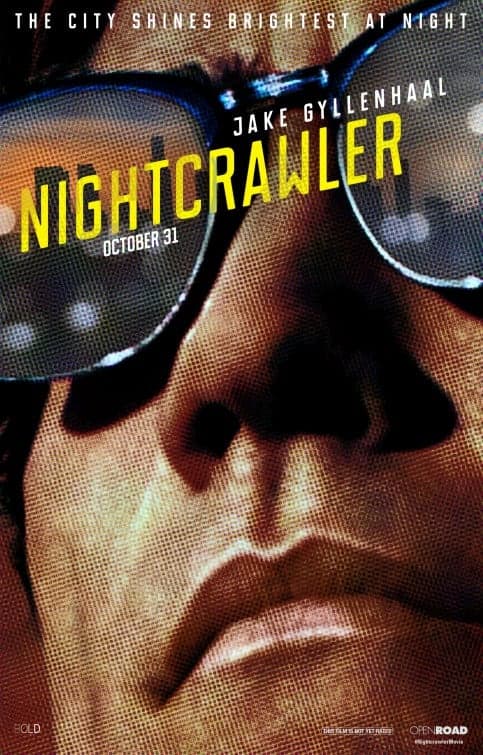 In this day and age, it’s very easy for someone to take a video of an event and submit it for viewing, whether it’s via YouTube or on the evening news. For example, during an earthquake or tornado people will submit their footage, and if it’s deemed good enough to show, it’ll hit the airwaves. There it is, your video with your name appearing on screen. If you have just the right footage, a video on YouTube can become an overnight sensation.

Not everyone on the planet is out there randomly shooting video in the hopes of capturing lightning in a bottle. Yet there are people, such as freelance videographers, who will run around town at night, going from incident to incident, hoping to capture just the right footage to sell to the highest bidder. They are known as “Nightcrawlers,” and their profession is the subject of Dan Gilroy’s auspicious directorial debut Nightcrawler.

Lou Bloom (Jake Gyllenhaal) is a real go-getter. When he sets his sights on something, he will go after it. He’s a quick thinker, a fast talker, an adept learner, extremely resourceful and usually the smartest guy in the room. Currently in need of gainful employment, Lou is also an opportunistic petty thief, which is something that seems to get in the way of him being hired for anything. On top of all this, Lou is clearly a sociopath.

When we first meet Lou, he is caught attempting to pilfer some copper wiring. He brutally assaults the guard, makes off with his bounty and never gives a moment’s thought to what he did. Later, while aimlessly driving around town, he happens across an accident scene and notices a group of men swooping in to film it all. Intrigued, he does some research and begins to venture out on his own as a nightcrawler. The more he does it, the better he gets at it, and he becomes more bold and brazen as he begins to manipulate, infiltrate and orchestrate events to help him get that “money shot.”

Gyllenhaal completely disappears into this role, and this is easily one of his best performances to date. Bloom, while not cut from the same cloth as Travis Bickle, is very much the sort of antihero that you don’t feel any shame getting behind and rooting for. True, he does some unsavory things, but you can’t help but admire him for his gall and tenacity. Gyllenhall is mesmerizing and keeps you on your toes as you wonder just what Bloom is going do next, how is he going to react and just what is he thinking.

Rene Russo also stars as Nina, the program director at a local station who pays for Lou’s footage and, despite moral objections, airs his work. She’s a strong woman who is willing to take the hard road if it means bigger net gains. The two of them are great together, especially during an awkward dinner scene where they discuss, well more like Lou tells her, how things are going to be. The film also features great supporting turns from Bill Paxton as rival nightcrawler, Joe Loder, and Riz Ahmed as Rick, Lou’s assistant/intern. It’s a very interesting dynamic; there are characters who are clearly the good guys, but we still find ourselves rooting for the bad guy, Lou Bloom.

Written and directed by Dan Gilroy, who wrote The Bourne Legacy, proves to be a very capable director. The chases, the action set pieces and the dialogue scenes are all handled as though they were directed by a veteran. His screenplay is filled with rich dialogue, memorable, flesh-and-blood characters and great set pieces. The aforementioned dinner scene has as much potency as some of the pursuits that unfold during the film. Gilroy’s film is nicely photographed by Academy Award-winning cinematographer Robert Elswit, who captures Los Angeles at night in a very film-noir-like style. The film is well edited by John Gilroy and is backed by another solid score by James Newton Howard.

Nightcrawler is smart, satirical, sometimes funny, frequently surprising and will have you on the edge of your seat from beginning to end. It’s a great thriller that sticks with you long after the credits roll, and the next time you see some graphic footage on the news, you may find yourself just wondering who obtained that footage and how did they do it.   This is one of the best films of the year.