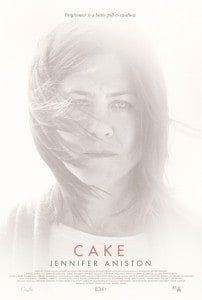 Cake was, sadly, a disappointing time in the cinema. I had looked forward to seeing it because of the buzz surrounding Jennifer Aniston’s performance as Claire Bennett – a woman struggling with chronic pain, drug addiction and the loss of a child.

Aniston has been nominated for a Golden Globe, Broadcast Film Critics Award and Screen Actors Guild Award.  She did not receive an Academy Award nomination, and I must admit that I found none of those preceding nominations particularly deserved.

The film opens at a chronic pain support group just after one of the group’s members, Nina (Anna Kendrick), has committed suicide by jumping off a Los Angeles freeway. Claire asks insensitive questions of the group about Nina’s suicide and is ultimately banned from returning. Nina’s “ghost” continually appears to Claire, although it’s unclear why.

Claire has a home caregiver named Silvana (Adriana Barraza), who doesn’t question Claire’s drug-taking, possibly because she knows that Claire is in pain at all times and needs the medicine even if she gets it illegally, as we see her do in a run to Mexico.  We do not know what caused the pain to begin, but we see scars on Claire’s body, and there is some mention that she has pins in her legs.

She suddenly appears at Nina’s house, meeting Nina’s husband, Roy (Sam Worthington), and his son.  They strike up a friendship that becomes increasingly important to her even as Nina continues to appear to Claire, though never complaining about Claire’s friendship with her husband. Nina acts as a reminder of what could happen to Claire if she’s not careful. At one point, Claire takes a lot of pills but then throws them up at will. She obviously does not want to die like Nina.

Aniston is in fine dramatic form, but it struck me that she has little to do but to act as if she’s in pain, pop pills, see Nina’s husband for company, and often battle with Silvana, who is only there to help her.

The film, overall, plays like a series of vignettes, though they are played one on top of the other. It is only director Daniel Barnz’s fourth feature film and screenwriter Patrick Tobin’s second script; and it shows. They seem unsure about the story they are telling, and while Aniston gives it her best, she seems lost in the screenplay.