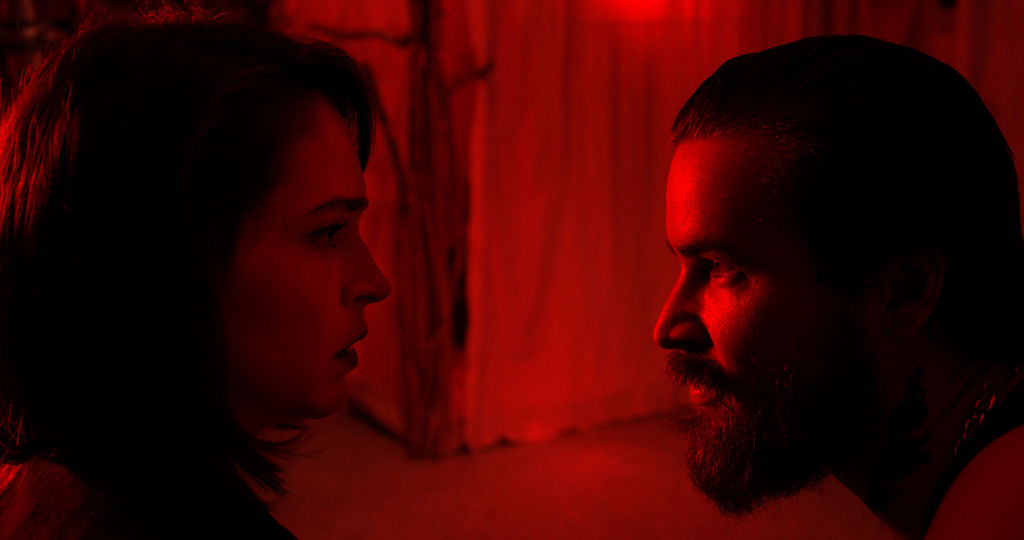 In the first scene of Fox Hunt Drive, Alison Meyers (Lizzie Zerebko) emerges from a turned-over car, wielding a gun. She’s out of breath, scared and in a dark, wooded area. When she’s hit over the head from behind, the screen turns black.

In the next scene we’re brought back to earlier days, and, now that it’s clear where this goes, we start looking for red flags. In trying to figure out how she got there, we miss the why and the subtleties that are leading us down a very different path.

Alison isn’t the person we think she is and neither is the passenger (Michael Olavson), who she picks up in her car. It’s these changes in character and perception that make this film unique, but it’s unfortunate that these elements are weighed down by a story teetering on the edge of believability.

Alison is a ride-share driver for Backseat, but if asked, she’d say she’s an architect. This is made clear by her monologue, narrated over scenes of her sketching, following up on job prospects, and driving people around.

One night she picks up a man in a motel parking lot. When he enters the car, she discovers he’s not her assigned passenger, Neil, as he doesn’t look anything like the profile picture. The man, referred to as “the passenger” (unnamed throughout most of the story), says that Niel sent the car for him. After some convincing, Alison agrees to drive him.

As expected the passenger is friendly but not too revealing. Alison meanwhile talks about when she kicked a man out of her car for hitting on her, and because of the company’s reaction, she’s on thin ice. To reassure her he’s a good guy, the passenger says, “You have nothing to fear from me,” which is pretty heavy-handed foreshadowing.

After some small talk, he gets a call and references the mysterious black bag he has with him. He then asks to stop at a rest stop. When he leaves the car, Alison opens the bag and pulls out a few items, including a gun, jewelry and a watch, the latter of which leaves blood on her hand. Now she’s stuck with this shady dude and his shady bag and things will definitely only go down from here.

Alison is detailed, neurotic and makes really questionable decisions. It’s hard not to spend most of the film shaking your head and talking to the screen. But that’s intended because when Alison’s plan starts to form — a plan that is actually aided by the passenger’s presence — it’s not even noticeable. Looking back, you see the signs, but it’s hard to spot on a first viewing. As Alison becomes more callous and confident, the passenger’s coolness gives way to panic as he begins doubting her true intentions.

The passenger and his black bag are only a part of the story. A hit-and-run, which happens not long after leaving the rest stop, skews the usual path that we expect to take. And though it changes the trajectory of the characters’ storyline, it’s also part of the problem.

As twists and turns bleed out from it, we get more and more suspicious because the events just don’t add up. Why does the passenger help Alison after the hit-and-run? Why is so much time spent on the detective investigating it? How does this crazy plan that Alison devised even get this far?

And then there’s unnecessary scenes combined with unnecessary people, like the sleazy drug dealer who owns what looks like an alligator —  a little too stereotypical Floridian, which definitely cheapens the film. The ending has far too many loose ends, and after spending so much time with these characters, it’s a shame it doesn’t end better for them.