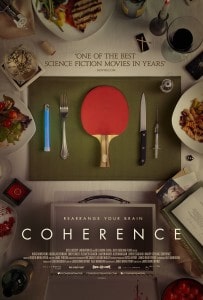 Coherence is a paranoia-laden independent sci-fi thriller by writer James Ward Byrkit, making his debut feature as a director. The unknowns really make the film all the more intriguing; and the core actors truly inhabit their roles.

The story opens on a house with eight friends having a dinner party. We get to know each of the eight friends better, but we do not know them well enough to set our sights on any one in particular. This is wise on Byrkit’s part because there is no protagonist or antagonist; at least, arguably, not until the film’s last ten minutes.

Much of the film revolves around the characters’ various interactions; some apparent past and current romantic entanglements are also evident. On this particular night, a comet is blaring overhead, and the revelers go out to take a look at it. Strange events begin occurring, such as cell-phone screens cracking or not working at all and the lights going out in the neighborhood. All but one house on the street have gone dark, and some of the friends go to investigate the anomaly. Things only get weirder from there.

Simply put, there appears to be a group of doppelgangers living in the house with the lights that are still on. Mysteriously, a book on quantum physics is discovered in one of the friends’ cars, and they begin reading about the possibility of alternate reality universes. Because some or all of the friends have left the original house, and because all or some have encountered people looking just like them, it becomes impossible to know who is one of the original eight and who is an imposter.

The friends devise various methods for dealing with their paranoia and figuring out who is “real” and “not real,” but these come to little avail; these are not, after all, specialists in physics who can fully theorize what may be happening. What Byrkit skillfully creates is a sense of paranoia, the likes of which I have not seen in a film in some time. Who is who? Who belongs to which house? There are markers, pictures and the like, which seem to help distinguish people, but these seem to be more confusing than helpful in the final analysis.

I will not divulge what I think the answer is because I am so afraid of being wrong in writing (and also don’t want to risk posting a spoiler here). Let me just say that this is a valiant effort for a small-budget science-fiction film and it definitely deserves a watch.