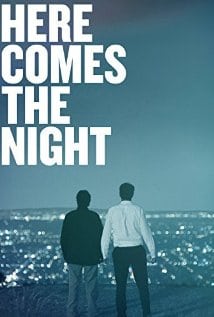 
Here Comes the Night has the hallmarks of do-it-yourself filmmaking. It was written and produced by directors Pete Shanel and Peter Kline as well as the film’s principal actors, Ben Duhl and Kurt Haas. The result is nearly 90 minutes of what amounts to the beginning of a film; that is, there is a premise that is never fully explored or realized. Duhl and Haas create likeable characters who might have something to say in a bigger universe than the one they inhabit on the streets of Los Angeles.

Nick (Duhl) and Leo (Haas), now in their 30s, are childhood and college friends who had drifted apart. They come together when a mutual college friend commits suicide, and his funeral is held in Los Angeles. Nick is a producer of sorts, though it seems he is one of those who is forever on the verge of making it without ever doing so. Leo is married with a six-month-old child; he flies in for the funeral and is reunited with Nick.

Nick wants to paint the town while Leo is visiting; at first, Leo is reluctant to join him. When the two encounter a pair of 20-something women at a miniature golf place, Leo changes course and becomes the instigator. This change in character was odd. Although Duhl and Haas act with ease, I did not understand the shift in character that happened so quickly for Leo.

The pair get into more trouble when they try to crash a party of one of Nick’s actor “friends” and when they go swimming in a stranger’s pool. But the two have not done anything too mischievous nor have they done anything that can be seen as particularly bonding, except that they have had time to talk to one another. I was left wondering at the film’s end whether the two will keep in touch. Ultimately, I was not fully interested in their relationship to care too much about it. Again, this is despite the fact that the principal actors have done a good job of carrying the picture with their acting chops in fine form. The film is short on real emotions and on a real connection between Nick and Leo. As co-writers, I would have thought Duhl and Haas would have given their characters more interesting things to do and say, but that is not the case here. Here Comes the Night is not a bad film; it just does not go anywhere.