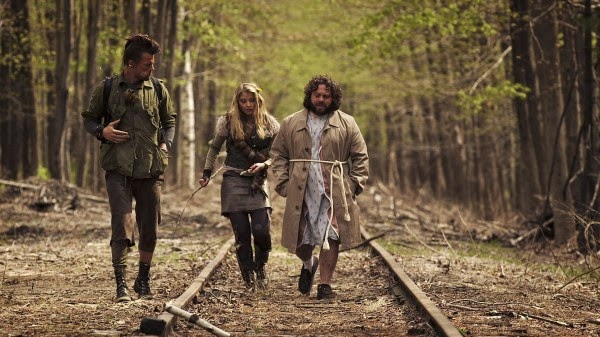 Just over halfway through Don Peyote, there is a scene in which star Dan Fogler breaks the fourth wall and talks to the audience. The film then cuts to a cameo by Topher Grace acting as Dan’s agent watching said scene and Grace’s character comments that since Fogler wrote the script, he has only himself to blame for what (a) is happening with his character or (b) what the audience is seeing or perhaps both. It is an apt moment for Fogler really does have himself to blame for this painful farce of a film. Though not aware of the breakdown of writing duties between Fogler and co-writer Michael Canzoniero, I am happy to hold each of them equally responsible for wasting 95 minutes of my life.

Don Peyote centers around Warren (Fogler), an unemployed graphic novelist whose days are spent smoking pot and surfing the internet to feed his hunger for conspiracy theories. At the same time, he is pretending to be excited about his upcoming wedding to Karen (Kelly Hutchinson) who is far too sane of a character to have ever ended up with Warren; their coupling is but one of the numerous unrealistic threads at the film’s core. Warren becomes interested in one specific “theory” in particular – that is, the proverbial world’s end set to occur in December 2012. Much of the film’s first half is about Warren and his friend Balance’s (Yang Miller) making of a documentary about the 2012 Mayan prophecy. We are subjected to footage of interviews with numerous individuals espousing their views on the subject as we watch the documentary being filmed.

Then, for no apparent reason, Warren has a break with reality. The vivid dreams he has in the film’s beginning are just a taste of the dream, or pot-induced trip, or whatever it is that lands him in a mental institution. During this segment, it was unclear to me whether he was dreaming or whether he was actually committed. However, when he escapes his confinement and wakes up in the back of a cab in a hospital gown, I assumed he really did spend time in a psychiatric facility. His cab ride is to a strange town to which he was drawn to visit in hopes of finding out if he is one of the world’s saviors in the guise of a “homo sanctus” or “spirit person.” Are you following any of this? No? No, neither did I when I watched it unfold on the screen. I see no reason to illuminate what happens to Warren at this point as he quickly becomes a homeless creature wondering the streets of New York shortly thereafter.

The film is a disjointed mess of pseudo-psychedelic images with Fogler front-and-center. Fogler is one of the film’s major drawbacks because he is narrating with voice-over and appearing on screen in nearly every second of footage. There is too much of him and not enough interaction with other characters; those interactions usually drive the comedy or drama in a film, but here, everything is driven by Fogler’s constant ramblings. No amount of screen-time given to his fiancé or best friend can compensate for Fogler’s overbearing presence. He can be an interesting addition to a film’s narrative as he was in last year’s Scenic Route which we reviewed here at Film Pulse and which I generally liked. So the problem is with the material of Don Peyote and its use of Fogler rather than with the actor himself. Please pass on this movie unless you have a burning desire to see and hear more of Dan Fogler than you ever thought possible.