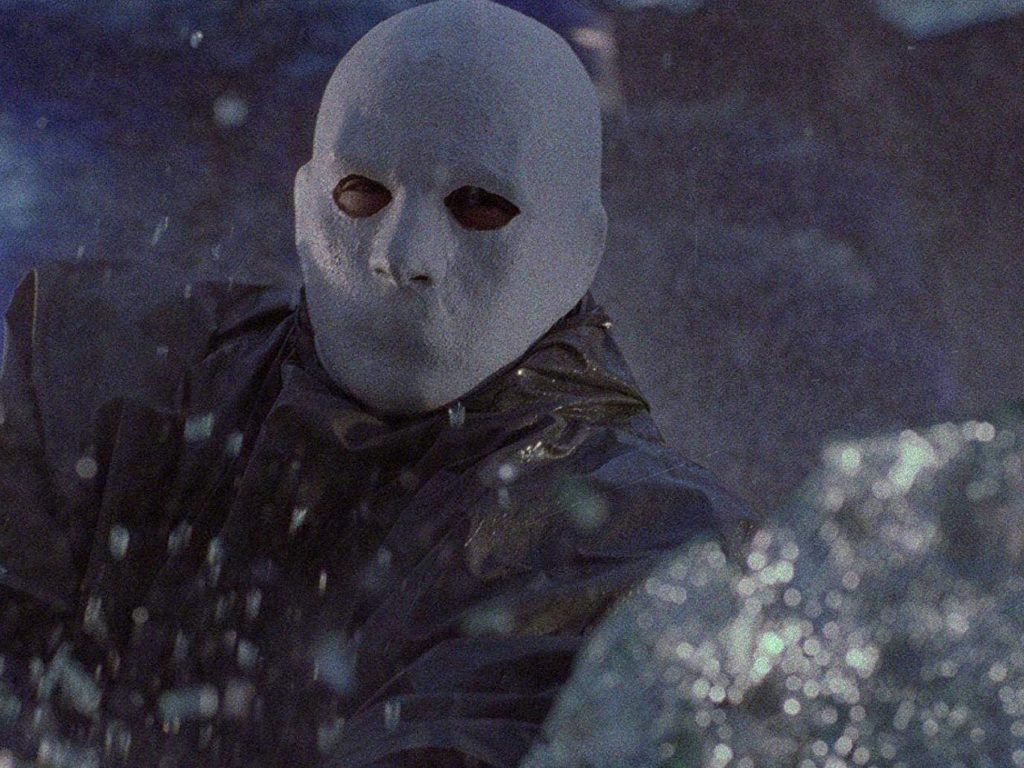 Arrow Video has always been one of the biggest saviors of lesser-known genre films, and they continue that trend with the new restoration of José Ramón Larraz’s 1988 slasher flick, Edge of the Axe.

Taking place in Northern California but shot in Madrid, the film follows all the standard slasher tropes but does so in an entertaining, though perhaps unintentionally humorous, way. It turns out there’s a killer on the loose in this small town, and it’s up to two twentysomethings to figure out what’s going on, but could it be that one of them is behind the murders? Of course.

The film opens with a woman going through a car wash while smoking a cigarette with all the windows up, an act that seems almost more unpleasant than the axe to the back she receives moments later, introducing our killer and setting the stage for a bloody series of events.

We’re then introduced to our protagonist, Gerald, played by Barton Faulks, a newcomer to the town who is obsessed with computers and “bodacious tatas.” After hanging around town for a couple weeks, he meets Lillian (Christina Marie Lane), and the two bond over computers and spark up a relationship. Gerald gives Lillian his old computer, and the two begin chatting in the evenings — with some of the strangest text to speech I’ve ever heard — and doing research to figure out patterns with the recent killings.

The killer stalks his victims while donning a creepy white-plaster-looking mask, and he exclusively uses an axe as his weapon of choice, resulting in some decent makeup effects work —  with Larraz making sure to keep every blade impact in frame. The kills aren’t necessarily memorable, save for one involving a woman getting her fingers sliced off, but they’re adequately suspenseful nonetheless.

The fun with Edge of the Axe lies within the ridiculous dialogue of the characters, making it very apparent that this is not a film originally scripted in English. Though this may have contributed in preventing the film from garnering more attention upon its release, it has helped it become something of a cult classic all these years later.

Previously, this title was only available on VHS, but now that Arrow got its hands on it, we’ve got a new 2K restoration from original film negatives, making this Blu-ray — hands down — the best version to see. Both the Spanish and English language versions are also included on the disc.

Bonus content includes new interviews with select cast members and crew, a commentary track by “The Hysteria Continues,” an image gallery, and the original trailer. Supplements-wise, it’s a bit lacking in comparison to most other Arrow releases, but there’s still some fun things to dive into here.

If you’re in the market for a more obscure ’80s slasher, featuring a creepy killer, ridiculous dialogue and predictably silly ending, Edge of the Axe is worth a look and is certainly a step above the rest of the derivative genre titles we saw in the waning moments of the decade.