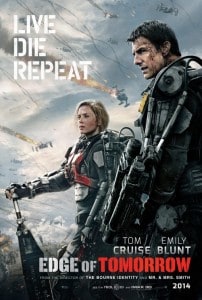 It would be very easy to be dismissive of this sci-fi actioner because of its obvious similarities to the comedy classic Groundhog Day. Based on the film’s theatrical trailer there’s no arguing that. However, by doing so you may be denying yourself the pleasure of seeing one of the best sci-fi films to hit the silver screen in several years.   A good science fiction film will always take something familiar and put a new spin on it and inject it with something fresh and new. Time travel movies are a dime and dozen and without naming names there have been some outstanding films in that genre.   Movies based on video games are often trapped by their source’s concept but for every few bad ones there’s always a really good one. Doug Liman’s Edge of Tomorrow fulfills the criteria for a good science fiction film in this fun, fast-paced, thought-provoking, often funny, Tom Cruise lead adventure.

The Earth is under siege by an invading extra-terrestrial force.   The Mimics, as they are called, have the ability to predict the enemies every move. Any victory earned often they comes with an unbearable price.   During a large offensive assault by the United Defense Force, Major William Cage finds himself on the front line in a fruitless battle where he is killed action.   However, upon his death he finds himself waking up with a severe case of déjà vu. Is he dreaming or is there something else afoot?     Obviously it’s the latter and the fun of the film is seeing how he sorts it all out.   Going any further beyond the Groundhog Day similarity could very well ruin one’s enjoyment of the film.

Watching the film is in many ways like playing a video game. Who can recall the frustration of just trying to survive the D-Day battle at the beginning of “Medal of Honor”?   How many attempts did it take before you finally advanced? Raise your hand if you didn’t cheat.  The film’s tagline is “Live. Die. Repeat.” which is essentially the mantra of any gamer.   Besides games like “Medal of Honor” or “Call of Duty”, the film brings back memories of many classic genre films like Starship Troopers, T2 and Source Code. You may recognize elements you’ve seen before, which adds to its charm, but Liman and company are able to keep the film fresh and entertaining.   The film is based upon the novel All You Need is Kill by Hiroshi Sakurazaka and after seeing the film one may walk away with the desire to read it.

The film stars Tom Cruise and Emily Blunt. They are both very good in the film and their chemistry is solid. Cruise does a great job of showing the degrees of change that Cage has gone through with each successive time loop.   You get the sense of weariness that such a predicament could manifest.   He also winningly conveys the humorous side of it as well. Emily Blunt kicks ass as Rita Vrataski, a fellow soldier who has proven herself on the battlefield.   It is often amusing when, much to the chagrin of Cage, Rita wants to reset. The film rests on their capable shoulders and thanks to them you’re ready to go along for the ride. The film also stars Brendan Gleeson as their commanding officer and Bill Paxton is hilarious as Cage’s drill sergeant.

Doug Liman and his three screenwriters, Christopher McQuarrie, Jez Butterworth and John-Henry Butterworth, have put together a film that more than fulfills the criteria for a summer popcorn flick. The action scenes are well-paced and memorable. The look of the aliens is very cool and menacing. The gravitas of the story helps bring balance to the silliness of the whole adventure. This isn’t brainless entertainment as it is smart and engaging. There’s much to be enjoyed here and will no doubt entertain even upon repeated viewings.