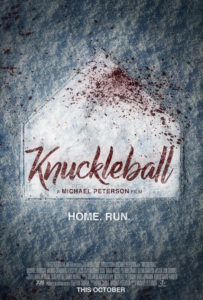 This is a repost of our review from Fantasia 2018. Knuckleball opens this Friday.

Playing out like a darker, more twisted version of Home Alone, Michael Peterson’s Knuckleball pits a clever little kid against a sadistic killer in a bloody game of cat and mouse. Chock full of twists and thrills, it provides a fun time at the cinema, though it lacks any real lasting power.

The film opens with Mary and Paul (Kathleen Munroe and Chenier Hundal) taking their son, Henry (Luca Villacis), to his grandfather’s farmhouse in the middle of nowhere while they attend a funeral. His parents don’t seem to be on the best of terms, so Henry escapes into video games, where he spends his time slaying goblins and orcs. 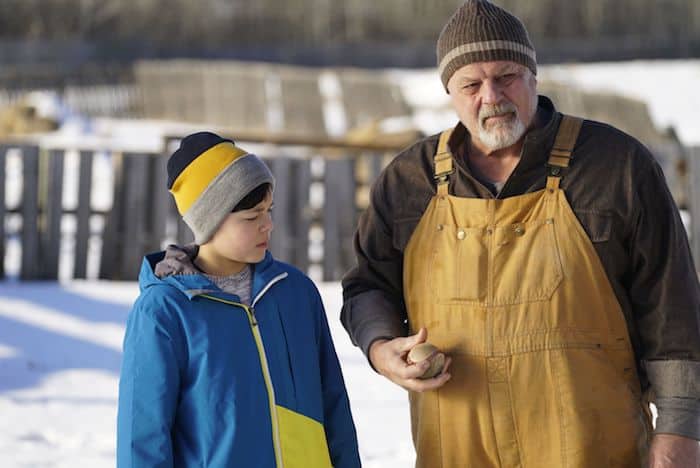 Upon arriving at the farm and after a brief goodbye, Henry is quickly put to work by his grandfather, played by the always-wonderful Michael Ironside. While working outside, making preparations for the upcoming winter storm, Henry is greeted by Dixon (Munro Chambers), the creepy neighbor who seems a bit off. Dixon is shoo’ed away, then Henry sees his grandpa smack the man as if to punish him for something.

The next morning Henry wakes up to find that his grandfather passed away in bed during the night, and after going to Dixon’s looking for help, realizes this man aims to do something horrible to him. Henry is a resourceful little kid, which we see early on in the film when he fashions an old-school trap for a feral cat he found outside. He creates a set of far more elaborate, and deadly, traps for Dixon as well, ensuring that he’s not going to give himself up so easily to this man, who, at the very least, wants him dead.

I will forever be a sucker for gearing-up scenes, and Knuckleball has an incredibly satisfying one involving Henry preparing his traps juxtaposed with Dixon sloppily lumbering through the forest toward Grandpa’s house. It always refreshing to see protagonists in horror films making the right decisions and using their heads to make logical choices about how to evade their perpetrators. It’s clear that, even with a couple decades between them, Henry is far more intelligent than Dixon, and he uses that to his advantage from moment one of their encounter.

As darker truths are revealed, Knuckleball begins to falter. These revelations are only explored on a very surface level, never really providing much of an explanation as to why characters took certain actions, and almost as soon as a new, jarring secret is revealed, it becomes resolved.

Though Michael Ironside’s character expires within the first act of the film, he makes a return several times through hallucinations or visions. While the first instance of this fits within the narrative, his last appearance felt extraneous and a bit silly considering how things turned out.

Still, Knuckleball is a suspenseful little thriller that, while not the most satisfying of the Home Alone derivatives (that distinction still goes to The Aggression Scale), it’s worth a look nonetheless.