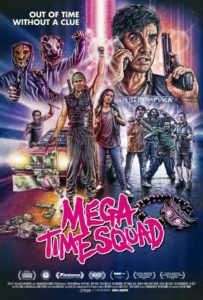 This is a repost of our review from Fantasia 2018. Mega Time Squad opens in theaters and on VOD platforms Friday.

Blending science-fiction elements with goofy crime antics, Tim van Dammen’s New Zealand comedy, Mega Time Squad, is an entertaining romp that poses the question of what would happen if an utterly inept criminal gained the ability to time travel.

Anton Tennet plays John, a low-level thug working for local crime boss Shelton (Jonny Brugh), who tasks John and his buddy to rob a group of Chinese gangsters who recently moved into town. After a successful heist, wherein he acquires a pile of cash along with an ancient bracelet, John decides to keep the money for himself and split it with his friend.

Unfortunately he’s double crossed, and Shelton catches John; but right before the thugs are about to end his life, John sees himself, who tells him to press the button on the bracelet he nicked. Pressing it causes John to travel back in time two minutes, allowing him to escape his captors, of course after informing his other self to press the button.

John defiantly ignores that adage of never interacting with yourself during time travel, and immediately begins to abuse his new power, resulting in an entire squad of Johns. This playful disregard for the space time continuum lends itself to the most compelling aspect of the film- the only thing more entertaining than a likable, goofy Kiwi thug is a whole mess of them.

The Chinese catch up with John and demand he return the money he stole or else he’s a dead man, but the only problem is Shelton took the money before attempting to kill John, so now it’s up to John’s self-proclaimed Mega Time Squad to get the money back, return it to the Chinese and – maybe, if he’s lucky – win the heart of Shelton’s sister.

This underdeveloped love story, never feeling fully realized, is one of only a few hindrances of the film. Their relationship blossoms entirely too quickly, and while it helps further the development of John as a character, it does little more.

As if it wasn’t bad enough that Shelton and his thugs and the Chinese gangsters were after him, there additionally appears to be an ancient demon on his tail. John has broken the cardinal rule of never meeting yourself when time travelling, which awoke the beast to bring back order to the timeline. This is another area where the film was slightly lacking, never revisiting this subplot until the finale and adding little to the overall plot.

The comedy in Mega Time Squad is a bit crass and sometimes pretty dumb, but the colorful characters, snappy dialogue (certainly evoking shades of Taika Waititi) and silly two-minute time travel mechanics all culminate into a highly entertainly genre mish-mash.

Mega Time Squad is a humorous take on the time-travel film, playing with some fresh ideas and fitting it nicely into a crime caper. Its fun premise and laugh-out-loud moments make its narrative shortcomings easy to forgive, and with its likable protagonist and equally endearing villains, this is definitely worth a look.