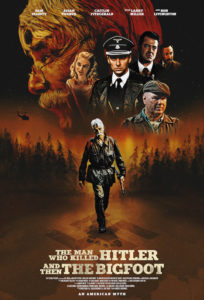 This is a repost of our review from Fantasia Festival 2018. The Man Who Killed Hitler and Then The Bigfoot opens Friday in theaters and on VOD.

With its brilliant, on-the-nose title, you may think that you know what to expect from Robert D. Krzykowski’s The Man Who Killed Hitler and Then The Bigfoot, and while it does contain those two things, at its core, this is a bittersweet love story about an aging war hero reminiscing about the life he once had.

Sam Elliott plays Calvin Barr, a decorated World War II veteran who successfully carried out the assassination of Adolf Hitler, though both the U.S. and German governments covered it up. Forty years later he’s approached by the FBI with a new mission: to hunt down and kill Bigfoot in the Canadian wilderness. As it turns out, Bigfoot contracted a highly contagious virus that’s killing every living thing within a 50-mile radius, and it’s up to Barr to kill it before it reaches the human population.

In a role that seems tailor fit for Elliott, Barr is a smooth-talking but gentle man’s man. He drinks a bit too much and is a slave to routine, but he lives a quiet life of relative solitude with his trusted K-9 by his side. He frequently has flashbacks to his time in the war and the things he did for his country, and he regrets taking a life, even if it was that of the most evil people in existence.

He also spends time remembering the love of his life, Maxine, played by Caitlin FitzGerald, who passed away many years ago. He never forgave himself for leaving her all those times in the past but seems to grapple with the insignificance of his actions, only having a stoic pride for his time serving.

Aided by whip-smart dialogue and Elliott’s unending charisma, it’s a film that is oddly bittersweet in its storytelling and nothing like the B-movie action flick one might expect. There is some action to be sure, but it comes late in the film after it already establishes the fact that this isn’t the conceit of The Man Who Killed Hitler and Then The Bigfoot.

When one of the agents tasked with bringing Barr in meets him for the first time, he regails him with the legends he heard about the man who killed Hitler. Those fortunate enough to be in the right circles to hear the tales regard him as a hero of near mythical proportions. Barr doesn’t see it like that, however, and it’s unlikely he’ll see it that way after his Big Foot mission either. He has little to show for the sacrifices he made for his country and sees little progress over the state of the world so many decades later. Still, there’s an optimistic aura about him, propelling him to continue to be a good person and reflect that onto others.

The Man Who Killed Hitler and Then The Bigfoot is a somber, sometimes-heartfelt film that, though containing its share of comedic moments, is perhaps a bit mismarketed as a goofy creature feature, when in fact it’s so much more. No doubt the slow pace and lack of rapid-fire action or horror sequences will turn away some viewers, but I came out of it feeling different than expected…but in a good way. The film is screening at this year’s Fantasia Film Festival.