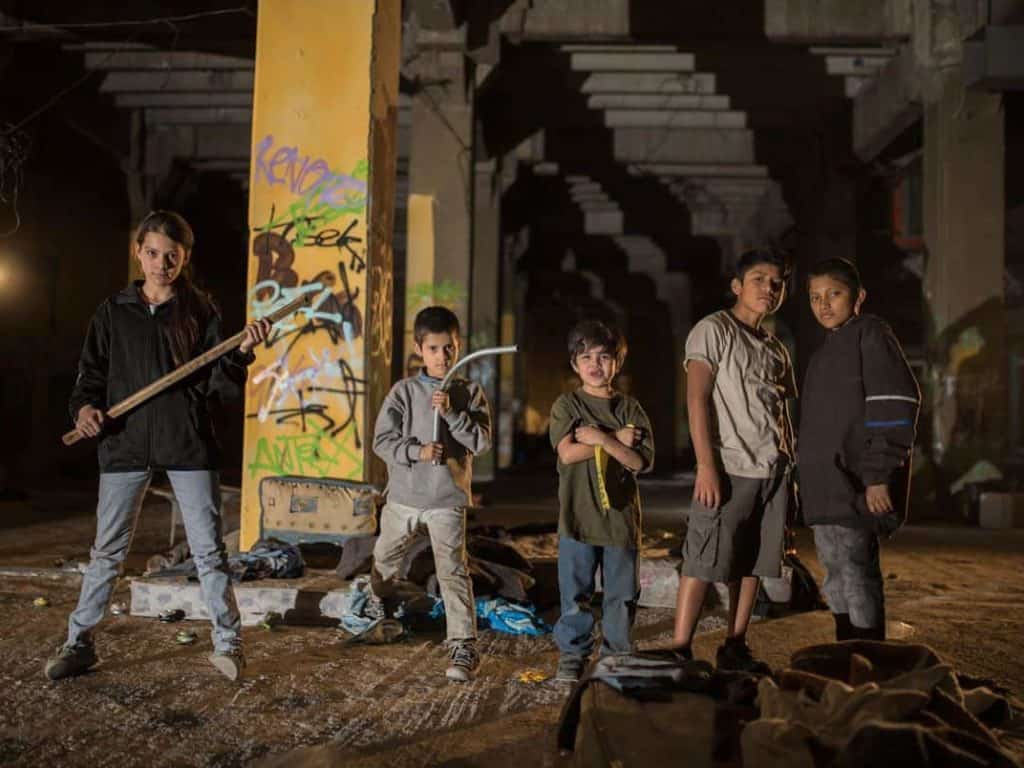 This is a repost of our review from Fantasia Festival 2018, Tigers Are Not Afraid opens in New York August 21 and Los Angeles August 23.

Set in the middle of a Mexican drug war, Issa López’s dark fantasy, Tigers Are Not Afraid, spins a carefully crafted, tragic tale of survival amid violent and horrific acts witnessed from the perspective of a child who is caught in the crossfire. Paola Lara stars as Estrella, a girl who, with nowhere to turn after her school is shut down due to the mounting cartel violence and the kidnapping of het mother, joins a gang of other displaced children who are hell bent on taking down the monsters who stole their innocence.

Estrella has a vivid imagination, which manifests the trauma in her mind into the real world, at first taking these visions as malevolent before realizing they have the ability to help her survive her situation. Part of her initiation into the gang involves having to sneak into a cartel member’s home and kill him, but before she can pull the trigger herself, she finds that someone else did the job for her. She gains the adoration of the gang members, who believe that she was the one who ended the man’s life, but now they have become an even greater target of the cartel.

Drawing similarities to the films of Guillermo del Toro, López deftly blends the innocent wonder of children with the harsh realities of a violent society ruled by the drug trade. While Estrella and her new friends are acutely aware of the horrors surrounding them, they’re still kids after all and yearn to play games and have fun, even if it’s while hiding out in a decrepit, abandoned building while hiding from a group of savage cartel members.

Mixing fantasy, horror and brutal, sometimes shocking, violence, the film successfully completes a delicate balancing act of blending all these elements into a compelling, heartfelt story without ever feeling hokey, exploitative or insincere. Lara gives a commanding performance as Estrella, showing the range and maturity that few child actors possess. She quickly steals our hearts, upping the suspense, as we so desperately want to see her make it out of this unscathed — something we suspect is not likely to happen.

Tigers Are Not Afraid is an excellent piece of genre cinema that is, at times, as beautiful as it is horrific, presenting a new and wholly unique perspective of how pervasive the drug cartels are in Mexico and specifically how they can affect all those surrounding them. It’s a tough movie, but it’s one that will resonate with you long after the credits roll.