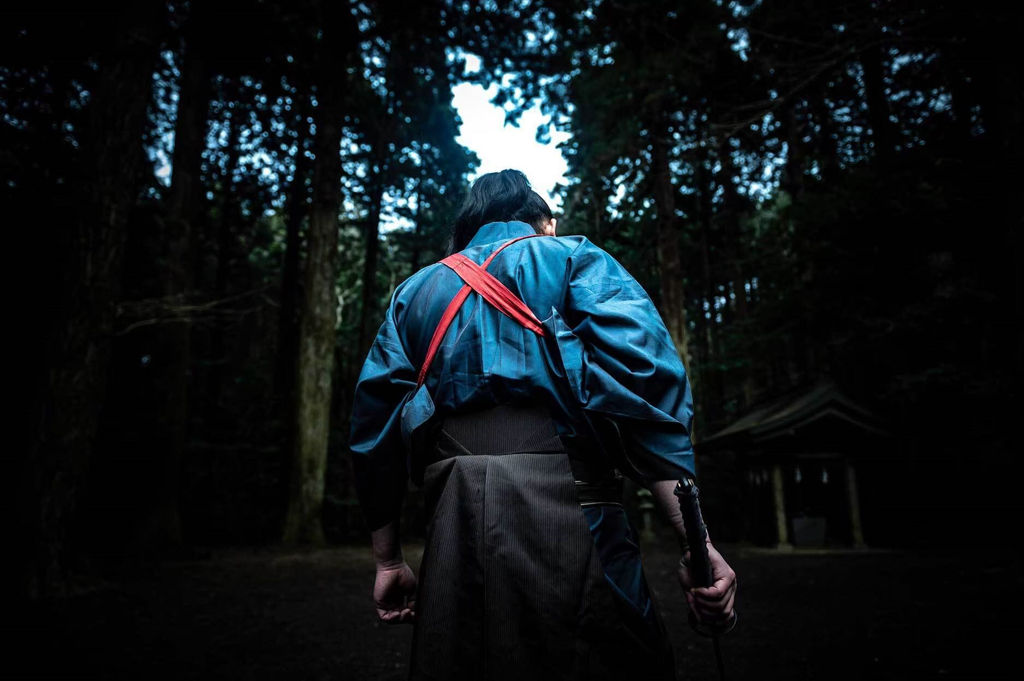 Musashi was dubbed kensai or “sword saint,” and his legend continued to grow even after his death in 1645. In Japanese cinema he’s been represented in dozens of films dating back to the aptly titled Miyamoto Musashi in 1929, and adding to his lengthy set of appearances is Crazy Samurai Musashi, an ambitious samurai actioner directed by Yûji Shimomura and written by Sion Sono.

The film’s official synopsis aims to make it clear exactly what you’ll be getting into:

This film, taken around the time of “Out and Deluxe,” consists of the most famous battle of the swordsman Miyamoto Musashi. In this 77-minute, one-scene, no-cut action sequence, Miyamoto (Tak Sakaguchi) defeats 588 enemies, one after the other. There is no room for error, no room for corny or unconvincing moves.

And that’s what you’ll be experiencing in Crazy Samurai Musashi: Tak Sakaguchi obliterating enemy after enemy for 77 minutes with no cuts. I felt nearly as exhausted as he looked by the end. It was such an incredible feat.

The premise is dead simple: the ronin Musashi killed a samurai, and the rest of the clan — comprising of no fewer than 400 soldiers — is gearing up to track and kill him. Too bad for them, Musashi is already at their village and aims to end them all. This is well within Shimomura’s area of expertise, having a successful career as a stunt coordinator and action director before helming his own features, all of which starred Tak Sakaguchi.

As you might imagine, the action is relentless, but concessions are made to capitalize on the whole 77-minute, no-cut thing, with choreography a bit safer, more grounded and less bombastic than what you might expect from a big samurai film. Most of the blood-letting is of the CG variety, though there are some cleverly hidden blood packs throughout the showdown to ensure that Musashi is covered in the stuff by the end.

Save for a brief intro sequence and an incredible final scene, this is a true, single-take film, meaning there are no hidden cuts to be found (that I could spot); Shimomura even writes water breaks into the script, allowing Sakaguchi to take a brief respite before jumping back into the fray and slicing up dozens more hapless samurai.

Although Sakaguchi is clearly the star of the show, exhibiting some incredibly physical endurance for being able to keep up the pace for as long as he does (especially for his age), the DP and camera operators also do a fantastic job of keeping the energy up and catching every bit of action, never missing a beat.

Musashi is an experimental film in a lot of ways. The bulk of the action is repetitive and, due to the nature of how it’s being shot, many of the sword blows look like they aren’t really cutting anything or as if Sakaguchi is simply bonking his enemies on the top of the head. There’s an occasional boss fight to break up the monotony of the endless waves of grunts, which are really great, but they often last only seconds as no one can really stand up to the skill of Musashi.

The final scene is an absolutely nuts fight that takes place seven years after the original battle, and when the credits abruptly begin to roll, I was left wanting more of that fight choreography, making the previous 77 minutes somehow feel slightly lackluster by comparison. That doesn’t detract from the sheer impressiveness of the technical and physical magnitude that went into it, but it did have me yearning for a more conventionally crafted sequel where we can see more stylized, tightly choreographed fights with Sakaguchi as Musashi.