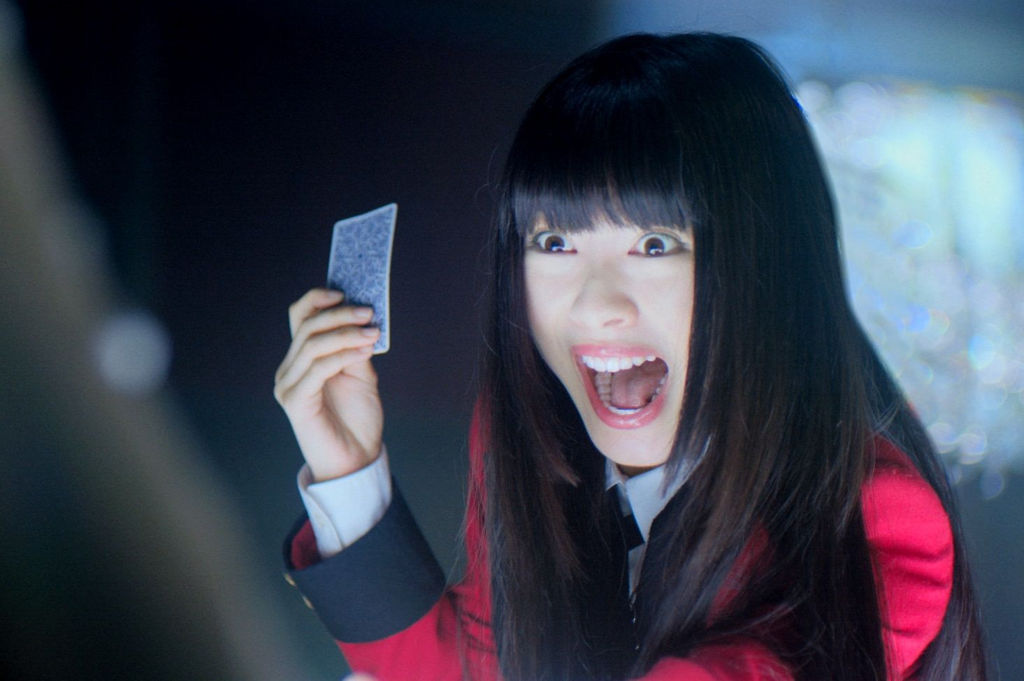 Continuing the long-standing trend of Japanese manga adaptations that center on a high school that specializes in some specific subject, Kakegurui is a high-energy farce about a posh private academy that’s composed of spoiled rich kids obsessed with gambling.

Originally a manga by Homura Kawamoto then an anime series (available on Netflix) then a live-action series and now a live-action movie, Kakegurui inherits the bold aesthetic of the anime and faithfully adapts the story, managing to accurately capture every over-the-top character and silly, intense gambling sequence.

Featuring the same actors from the live-action series, the film takes place in Hyakkaou Private Academy, a high-class school for rich kids that is ruled by gambling in nearly every form. From simple games like Rock Paper Scissors all the way up to Russian Roulette, these kids do it all. A hierarchy has formed around this obsessive gambling, with the student council controlling all aspects of the academy. If you win you make money and work your way up the ranks of popularity, perhaps landing a seat on the council, but if you lose and can’t pay up, you become the property of the council — a lap dog that must accept whatever life plan they choose for you.

Like most other Japanese high-school stories, there are no teachers or adults to be found anywhere, and this small microcosm appears to be the center of the universe for these kids, determining not only what happens in their four years of school but somehow also the rest of their lives. After you’ve seen enough of these shows and movies, it’s just something you come to accept, despite how ridiculous and arbitrary it all is.

Kakegurui manages to be significantly more fun than many of the other anime-to-live-action adaptations, however, with the overreliance on melodrama taking a back seat to overproduced, wildly entertaining gambling sequences. After an anti-gambling group called The Village forms and begins to threaten the student council’s power, a huge gambling tournament is organized, with the winners taking home ¥300 million and a blank life plan that allows the winning team to write their own futures.

Having not seen the entire anime series or the live-action show, I suspect this follows the same plot, but there is a feeling of things being truncated here, with the tournament only consisting of two games. As such, the tournament itself provides the most fun, with everything else — specifically the growing war between the student council and The Village — to feel extraneous and far less exciting.

Like the anime, most of the characters are exaggerated and intensely emotional, although there’s not as much of the weird and inappropriate sexual innuendo in the movie. This level of intensity frequently straddles the line between over the top fun and annoyingly grating.

Director Tsutomu Hanabusa has a difficult time simply moving on with a scene, often lingering on for far too long with characters losing their shit. Indeed this is something present in the anime, but it’s annoying there too.

Most anime to live-action adaptations are really hit or miss, and while Kakegurui isn’t as thrilling as something like Animal World (the Chinese adaptation of the manga Kaiji), it’s still a step above many of the lazier live-action anime titles.