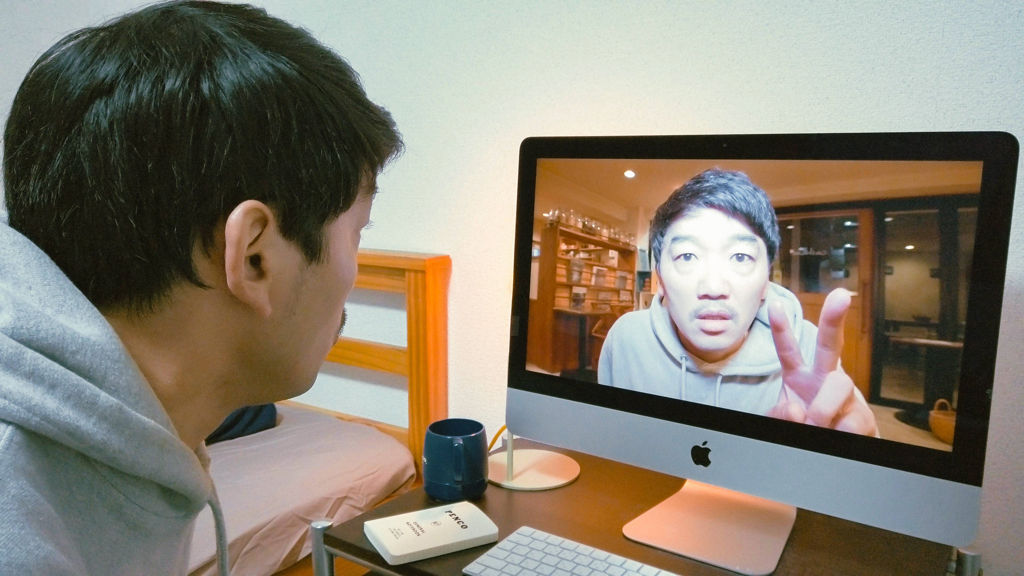 Creative filmmakers have proven multiple times over that one doesn’t need a big budget to craft a mind-bendingly entertaining time-travel film, with titles like Primer and Timecrimes showing audiences that you can still have a narratively complex science-fiction story without dropping $100 million on the budget. Junta Yamaguchi’s Beyond the Infinite Two Minutes is perhaps the most shining example of this, presenting a wildly entertaining, single-take time loop movie that makes good use of its shoestring budget.

The film opens with Kato (Kazunari Tosa) closing up his small café and returning to his modest apartment above the shop, only to discover a video feed of himself pop up on his computer screen. As it turns out, some kind of wormhole has opened up between his monitor upstairs and another screen downstairs in the café. The thing is, the monitor downstairs is two minutes into the future.

After showing two of his friends, the trio begin experimenting with this anomaly, eventually bringing the past screen to the future screen, pointing each one at the other, causing an infinite series of two-minute scenarios. As one might expect, this becomes increasingly complex as other people get involved and the stakes rise.

Aside from working out the logistics in how these monitors somehow have cameras embedded in them and why Kato had a power cable long enough to stretch down several flights of stairs, Beyond the Infinite is a blast of a time-loop film from start to finish.

Yamaguchi seemed to know exactly how long a film like this could keep an audience engaged and smartly kept the runtime at a brisk 70 minutes. Because we’re dealing with 2-minute-long loops and not full days like, say, Groundhog Day, things tend to get exasperating fairly quickly, but thankfully Yamaguchi mixes things up a bit right when my patience was at its limit.

At first, I wasn’t quite sure why the decision was made to present this as a single-take film, with only a handful of noticeable cuts masked by some panning trickery. As things become more chaotic, the reason for the mechanic becomes apparent, with the effect of being in the past upstairs and moving into the future downstairs being very impressive on a technical level. There were likely some very tight timings that needed to be employed to make everything fit together perfectly, and the entire cast and crew does a great job making it all work.

Despite mentioning the stakes getting higher later in the film, things are thankfully kept fairly light and breezy. This is a sci-fi comedy to be sure, and it never gets too serious despite some dangers cropping up. It’s consistently humorous, though never laugh-out-loud funny, but it never veers too far into goofball territory either. It straddles the line between being accessible but not stupid.

Beyond the Infinite Two Minutes is a fun, lo-fi time-travel movie that’s deceptively simple and brimming with charming creativity.