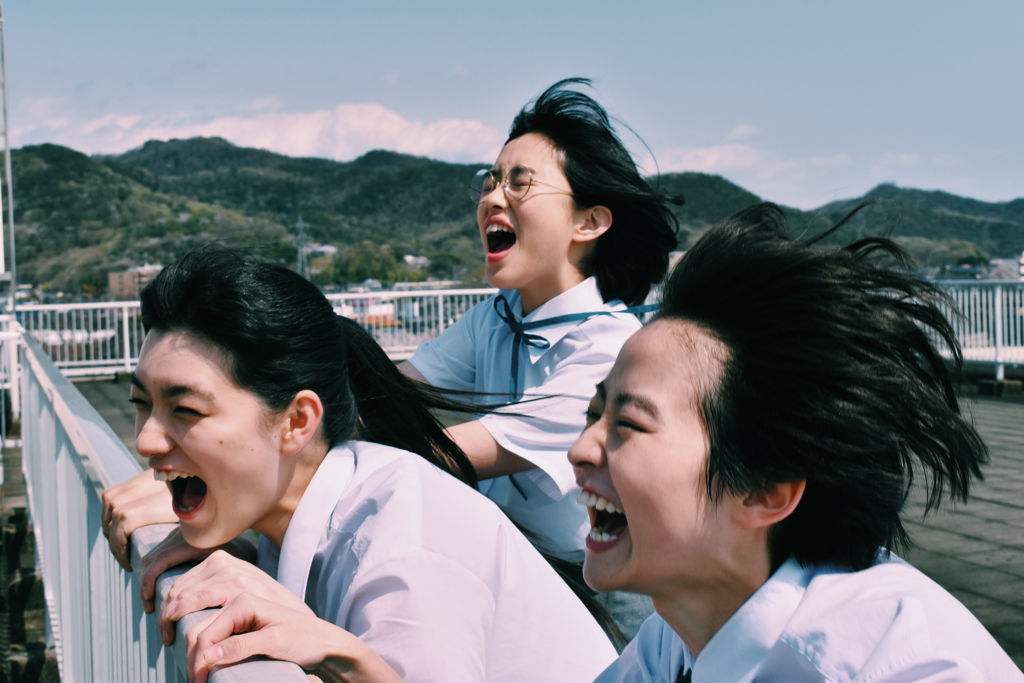 Soshi Matsumoto’s It’s a Summer Film! functions as another entry in the ever-growing canon of contemporary Japanese films that effectively and affectionately act as love letters to cinema itself and the impassioned idealists who make them. Whereas other recent films that make filmmaking their theme, such as One Cut of the Dead and Red Post on Escher Street, paint film production as an an arduous uphill battle of setbacks and compromises that is ultimately worth it in the end, Matsumoto’s tale of a rogue high school cinema club cutely champions the raw motivating power of unabashed cinephilia as the special ingredient to filmmaking. Pairing an infectious feel-good ethos and laudatory view of the movie-making process, Matsumoto’s effervescent comedy about the production of an amateur samurai film is almost too charming to not appreciate.

The hope of Matsumoto and Naoyuki Miura’s script is for you to see something of your youthful film fandom in Barefoot (Marika Ito), a card-carrying cinephile constantly clashing with her peers from the high school’s cinema club. While her classmates rally their production around the airless romance drama of de facto leader Karin (Coda Mahiru), whose schmaltzy love story would work as parody of the popular dramas on television if it weren’t so sincere, Barefoot’s desire to create a classic samurai chambara modeled after the likes of Zatoichi and Yojimbo film goes unappreciated within the club.

Squirreled away in an abandoned van that has been converted into a screening room where she watches the classics and works on the script to her opus, “Samurai Spring,” she opines endlessly on the majesty of the genre to compatriots Kickboard and Blue Hawaii (Yumi Kawai and Kirara Inori) and her harbored desire to show up Karin’s production by making her own film. It’s clear from the onset by the amount of references baked into the script and the adulatory way Barefoot describes movies that Matsumoto is speaking to a very specific audience in mind who would share in the film’s overall idealized view of the medium. The manner in which the script telegraphs its samurai film references is charming if a tad overblown, giving the audience ample time to nudge the person next to them when Mifune or Nakadia is brought up.

We follow the trials of their embattled film production —from assembling a crew of schoolyard misfits to Barefoot’s constant writer’s block to the usual trials and tribulations of a first-time filmmaker jumping into an exceedingly technical world. It’s all played for light, airy comedy, which almost always lands due to the strength of the loveable ensemble, their endearing chemistry and the doting manner in which Matsumoto frames their amateur production.

The setbacks on their set aren’t necessarily presented as dramatic, and there is not much in terms of conflict hanging over the film as a whole, outside of some dramatic beats that are sensibly resolved. Instead, It’s a Summer Film! is as carefree as they come, and that is its greatest strength — being a love letter to the indomitable spirit of film fans and the creative ways in which they express their fandom.

The one possible wrinkle in the film’s delightfully carefree ethos is in the form of Barefoot’s lead actor, Rintaro (Daichi Kaneko). At first just a fellow samurai fanboy who seems overly invested in Barefoot making her film, the bizarre hook of It’s a Summer Film! is that Rintaro is in actuality from the future and has travelled back to see Barefoot’s first film, which does not yet exist in the future.

In fact, according to him, in the future we live in a Quibi-esque dystopia where all films are five minutes long, and while this subplot allows Barefoot and the film to wrestle with a consequence of some type (and gifts the script some easy fish-out-of-water jokes, as Rintaro is continually mystified by the present day), the understated way in which it is brought into the narrative leaves a lot of potential opportunity unrealzied.

The time-travelling mechanic feels courtesy of another script that was hastily grafted onto this story of a spunky cinema club and its summer filming a movie (or perhaps heavily inspired by the 2010 adaptation of Yasutaka Tsutsui’s novel, The Girl Who Leapt Through Time).  Even with the supposed future of cinema added to the equation of Barefoot’s film production, Matsumoto never attempts to develop any lasting stakes out of it. The appeal of Its a Summer Film! is not in its stakes but in its ability to skate around the very need for them.

Through its overwhelming affection for samurai cinema and the filmmaking process, It’s a Summer Film! is one of the most feel-good experiences of the year. Bizarre time-travel hook aside, when it delves into its own cinephilia and places movie-making on a pedestal through its simple yet effective storytelling it is purely bewitching.