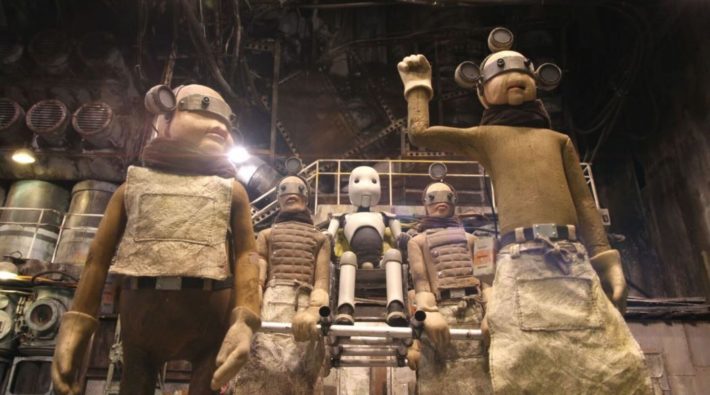 In Takahide Hori’s impressively realized stop-motion science-fiction epic, humanity lives ignorant to the sprawling subterranean world thriving thousands of miles beneath their feet. In Hori’s bleak estimation of where our current technological pursuits will lead us, mankind has gone overboard with genetic manipulation to live indefinitely at the cost of their ability to reproduce.

A byproduct of this rampant gene splicing is the creation of the Marigans, mutant creatures that were tasked to develop the underworld to ensure the survival of the human species.

After the Marigans rebelled against their human overlords and evolved and thrived thousands of feet below the surface of the precarious earth, human civilization on the surface launches an ecological study to understand the Marigans’ ability to evolve in the underworld in the hopes of finding an answer to the lost function of reproduction.

This is the setup to Hori’s gorgeously realized journey into the sprawling expanse of the Earth’s abyss, which offers audiences a tour of the director’s unique visual style. Based on his 2013 short film of the same name and produced independently over the course of seven years, Junk Head is a virtuoso showcase for Hori’s talents in the fields of character design and stop-motion animation, wherein the painstaking labor and passion is visible in every photographed frame.

Ambitious doesn’t even begin to cover Hori’s world-building and production design on display, drawing you in with his fully-realized industrial vision of a future dystopia under the surface that is teeming with an assortment of genetically baffling yet grotesquely interesting creatures. The gritty textures, moody lighting and tangible refuse materials used to construct the sets within this modern mechanical underworld allow it to leave quite the impression as Hori takes us through the granular layers of his junk-filled world.

Despite the enviable care placed into the unique character looks and makeshift sets, Hori’s premise keeps it wisely pared down to a comical hero’s journey. The human being lucky to be selected for this subterranean fact-finding mission (like all characters, voiced by Hori in a guttural facsimile of what a future language would sound like) has his transportation and futuristic body immediately destroyed by hostile underworld denizens, his memory wiped and his head thrust into the care of a trio of bumbling junk collectors.

They whisk him to a doctor who constructs a makeshift body out of whatever bits and pieces cluttering the refuse-laden corridors of the underworld he could find and send him on his way to run into all sorts of nasty creatures and strange beings festering beneath the surface. The way the film is paced, Junkers (as he is later dubbed) will have his body destroyed and reconstructed several times as he accidentally lands at a lower level of the underworld at the violent pushing of one of Hori’s monsters. While it might seem repetitive narratively, it allows the film to show off more of Junk Head’s fascinating creature and set design, which is the major reason why you should go out of your way to see this film anyway.

Hori’s design work on the creatures that populate the catacombs of Earth’s core are truly inspired works of world-building. From the comically intriguing – such as the rotund, Minion-esque, leather-clad Junk Collectors who shepherd around our amnesiac hero or the large, muscular female machine operators who run the pipe system – to the grotesque, arachnid-like monstrosities that prowl the hallways for prey, Junk Head is granted a look all its own and is comparable to few other science-fiction works of the past decades.

Wholly unique, the film benefits greatly from Hori’s scrupulous stop-motion animation, which is smooth, ambitious and grants his characters such a forceful sense of personality. From the heart-pounding action sequences to the contemplative character beats, Hori’s animation never falters in convincing you on the believability of his vision, but that’s the result of seven years of dedicated work.

Junk Head is a must-see film if only to marvel at its look and feel in motion and to be baffled at how this all was the product of one dedicated individual’s intent. It is a sprawling, awe-inspiring film that proves stop-motion as an animation medium is alive and well and still pushing the boundaries of what is conceivable. Even though much of the film is a retread of the more condensed and concise short film of the same name, given the feature length, Hori’s is able to deliver a fully developed world that has to be experienced.