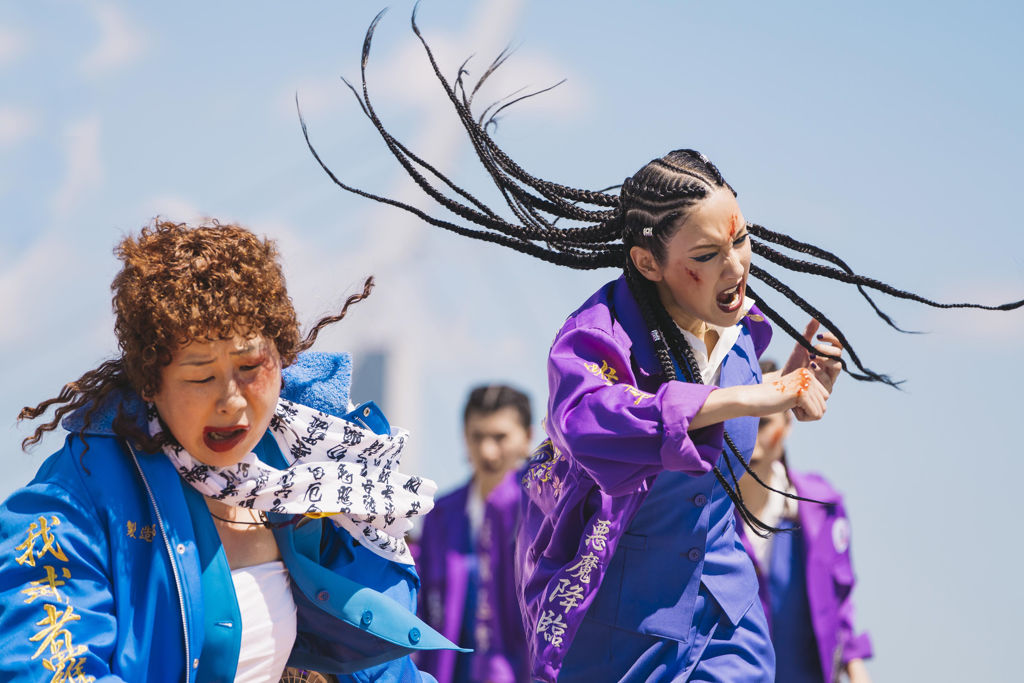 The joy of a film like Kazuaki Seki’s raucous Office Royale is having your expectations met by its straightforward commitment to its farcical premise. You know exactly what you are in for when you hear such a simple yet evocative title: office workers engaged in a physical, free-for-all battle for supremacy. How could that possibly not deliver by clearing the low bar of some gratifying action set pieces?

Taking the combative workplace politics of the Office Lady (OL) culture prominent in Japan’s corporate structure and literalizing it through the tropes of popular manga based on gang warfare (à la Crows or Bakuon Rettou), Office Royale presents itself as a stylish beat ’em up emulating a pseudo-feminist empowerment statement concerning the consistently exploited status of women in the workplace.

Seki’s film looks at the OL culture of Japan as if it were bifurcated between two opposed worlds: in one, young women perform rudimentary administrative and clerical tasks in high-pressure work environments and, in the other, warring factions of office ladies representing different departments and companies in garish gang colors over their office uniforms duke it out in knockout, drag-out brawls for ownership and territory. On the former side is Naoko (Mei Nagano) a 26-year-old, soft-spoken office worker who calmly does her work and chit-chats with her colleagues while her workplace routinely becomes a battlefield around her.

Content with her humble life of filing and answering phones, she remains unfazed by the warring clans of the Mitsufuji office building where she works who regularly excuse themselves from their desks for an impromptu mêlée. This boundary between these two worlds becomes intertwined when Ran Hojo (Alice Hirose) starts working at Naoko’s company and they make fast friends. With an unmatched skill in beating down her coworkers and a desire to be the toughest OL in all of Japan, she soon rises in the ranks at Mitsufuji and draws the ire of tougher gangs across Japan’s corporate structure.

From this point in the narrative, screenwriter Bakarhythm starts to crib liberally from the delinquent and gang mangas that served as Office Royale’s inspiration, with the self-aware Naoko (a self-described manga fanatic) offering a running internal commentary on the film’s plot and comparing it to recognizable story beats in manga. “There is always a stronger Office Lady looming over the victory of each battle” and so on.

In fact, much of the humor from Bakarhythm’s script comes from how unquestioned the reality of this violent office warfare goes: loud and boisterous office ladies in gaudy Yankii jackets beating the living daylights out of each other and then returning to their duties at the office with nobody raising concern over this system. To be generous, we could read Seki’s film as a not-so-subtle metaphor for the competitive OL field under Japan’s hyper-capitalist structure, which needlessly pits idealistic women against each other to survive despite their low position of influence on the corporate ladder. Yet Bakarhythms’s treatment of the scenario is too irreverent and structured around the spectacle of the physical clashing of larger-than-life office ladies to sustain such a message.

The drawback is that Seki’s approach to the concept finds more humor in the idea rather than the follow-through of it. While his pop-art aesthetic and ostentatious colors are reminiscent of the mangas he takes inspiration from and is well served in Office Royale’s fight scenes, the effect is occasionally dulled by Seki’s pacing and editing.

There is a lot of mileage gained from a heavily repeated sight gag, where a new challenger will appear to challenge Ran for her spot only for Seki to comically cut away to mundane office work and chit chat before returning to that challenger bloody and beaten. Although Office Royale features multiple eye-popping, heavily stylized brawls that feel like they are aggressively attempting to emulate the look of anime (and succeeding for the most part) in its third act, it drags its feet to deliver on its premise’s promise.

The establishing of this world of battling clerical assistants is slightly belabored when the draw is to see stylized fight choreography and the script finds nothing funnier than to constantly tease that payoff. But when that payoff comes, it is frankly enthralling, one of the best live-action anime adaptations to not even be based on an anime.

The dual narrative of Naoko being thrust into a combative version of her profession that she is an outsider to and Ran battling her way back to the top offers some illuminating and very funny commentary on the overused manga narrative structure, and the cast is universally charming in their outlandish costumes and physical roles. Even if it takes it time to get there, the wait results in an absolute blast of a film, so it is perhaps worth it.