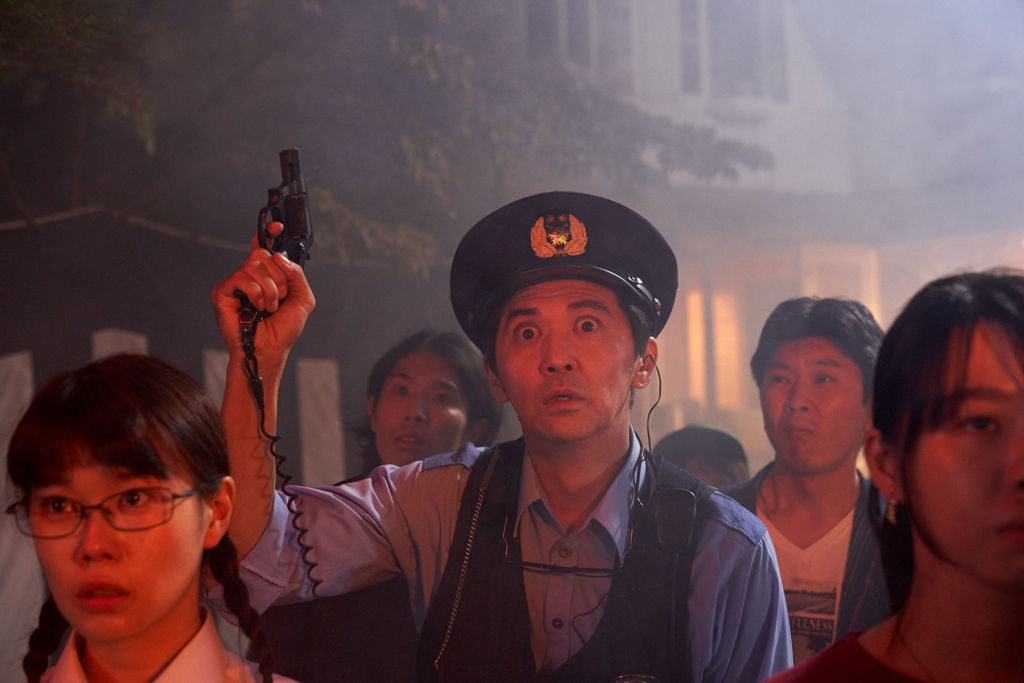 In many ways Masashu Yamamoto’s Wonderful Paradise, the cult filmmaker’s first film in six years, is a treatise on how social media tends to blow minor things grotesquely out of proportion. Stern patriarch Shuji (Seiko Ito) has squandered the dysfunctional Sasaya family’s finances on his gambling addictions and ill-advised investments and, as such, has been forced to move out of and sell their ancestral home – a large, ornate mansion on the margins of Tokyo.

In the midst of the family packing up their things and soberly reflecting on how they arrived at this point, Shuji’s daughter Akane (Mayu Ozawa) posts an open-house notice on Twitter and extends an invitation to the World Wide Web to “come party with us one last time.” While most of us would simply scroll past this if this highly specific post were to find its way onto our feeds, in the ludicrously absurdist world of Wonderful Paradise, this invitation is apparently too good to pass up.

Patterned after that uniquely anarchic and surreal Japanese comedy style that is most closely associated with Katsuhitto Ishii’s Funky Forest, Yamamoto’s film unfolds across a series of bizarre non-sequiturs and nonsensical storylines that coalesce around this rapidly escalating house party sparked by Akane’s social media post. Tragically, to explain these storylines is to take away much of Wonderful Paradise’s appeal of being shocked by the outlandish directions it goes in. Dozens of guests and oddball personalities soon arrive to celebrate the Sasayas’ move-out, and the film progressively goes off the rails into the territory of unhinged magically realist style.

The grounded family drama of the Sasayas’ financial woes and the gravity of them leaving their ancestral home is soon lost among the film’s many senseless digressions and encourages you to go with its illogical flow. It’s weird; it’s wild; and it’s best experienced once you accept its oddness and let it wash over you.

Yamamoto’s understated stoic direction belies the pure insanity of his imagination when it comes to capturing this house party gone wild. Even as subplots go beyond the pale of logic (such as a sentient coffee bean monster taking over the living room, a child transforming into a stick, a wedding taking place between two people spraying blood out of their necks, etc.), Yamamoto’s camera acts as the straight man to Wonderful Paradise’s absurd ramblings, capturing even the strangest bits with a still camera, which barely acknowledges what it is pointed at. Despite how far some of Yamamoto’s jokes go into the realm of weirdness and how often they just don’t land due to their inscrutability, his overall direction is so committed to the premise of just-so-odd-that-it’s-compelling that it is difficult not to get absorbed by Wonderful Paradise’s chaotic energy.

The film’s forgoing of any sense of stability is a blessing and a curse – ultimately, because as much fun it is to strap yourself in and tune yourself into its peculiar frequency, Wonderful Paradise lacks the sense that it is building up to something satisfying. While the pacing ensures each of the odd storylines is given the time to develop and escalate, the constant mounting strangeness is excessive to the point of being incomprehensible and difficult to grasp in what direction Yamamoto is heading. While this is no doubt the point of the entire exercise – overwhelm the audience with insane prattling and bizarre vignettes until even caring about what is and what isn’t “grounded” is a fool’s errand – unless the off-kilter humor speaks to you, Yamamoto’s digressions can become tedious.

Even so, the escalation is nonetheless fun to watch unfold, and the sheer unpredictability of the film’s flow makes it a “see it to believe it” kind of experience. You have to respect the anarchic energy on display that throws everything, including a full Bollywood musical number, ghosts and a cocaine-fueled religious cult, at the wall to see what sticks. Much like the Funky Forest films, this kind of energy is an acquired taste, but even if it never feels like it is building to much beyond the audacity of its inane weirdness, the weirdness is pretty enjoyable all on its own.