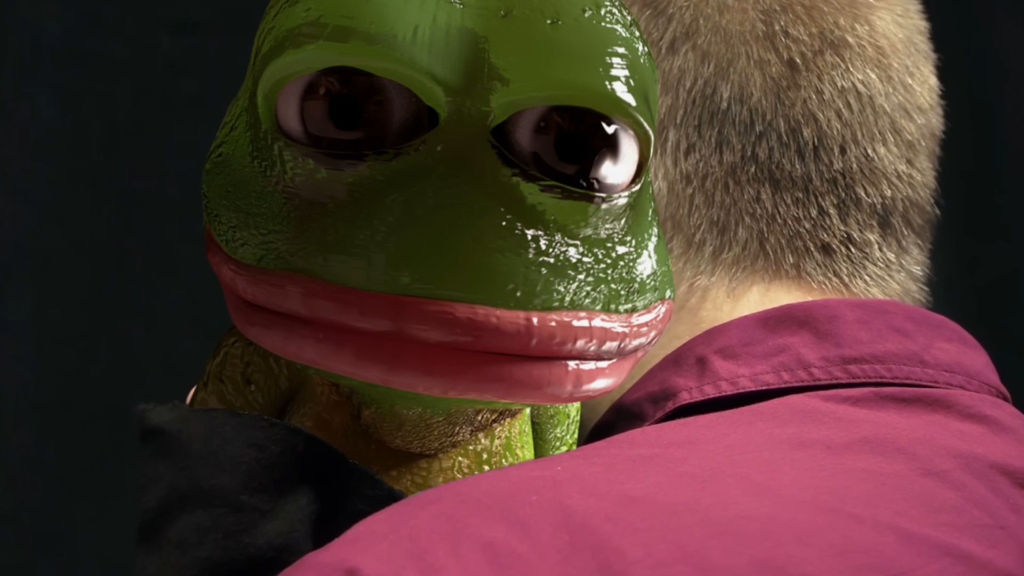 A man who purports to be a practicing chaos magician speaks eloquently on the history of memes and their ability to influence the masses. His name is Billy Brujo; his face is adorned with corpse paint, and he declares passionately that memes are much more than an element of a culture meant to be transferable easily with punchy humor and large block text.

In fact, unbeknownst to most “normies” who haven’t submerged themselves in the darker corners of the internet (4chan and the like), where a constant stream of memetic symbols is the normal method of interface, memes contain an inherent and exploitable magic that has resulted in an unprecedented influx of spiritual power into societal interactions and the way we perceive the world around us. And there exists no better real-world example of this functionality than the unprecedented and farcical 2016 United States presidential election, when dark horse Donald Trump was “memed” into the highest seat of power in the Western world using cartoon frogs.

Thus is the eclectic purview of Hayley Garrigus’ experimental documentary You Can’t Kill Meme. Inspired initially on the Kirk Packwood monograph, “Memetic Magic: Manipulation of the Root Social Matrix and the Fabric of Reality,” and a series of blog posts by author and occultist John Michael Greer entitled “The Kek Wars,” Garrugus’ film casts a wide net around a number esoteric concepts in order to tease an explanation as to how the online alt-right in America came to be enamored with symbiology and chaos magic around the 2010s.

Using the principles of magic as her shepherd into this terminally online world of irony posters and a multifarious approach to the film’s imagery, which feels like the unpleasant spillover from an imageboard frequented by her subjects, You Can’t Kill Meme proves to be a valiant effort to profile the arcane tactics of the online alt-right and how exactly the 2016 presidential election sufficiently broke our collective brains.

Befitting her strategies, Garrigus zeroes in the memetic power of one persistent meme for her documentary’s focus: the eternally recurring image of Matt Furie’s Pepe the Frog. While the concise cultural explainer of that specific meme already exists in the form of Arthur Jones’ wonderfully informative film, Feels Good Man, Garrigus takes a more scattershot approach in trying to get at the root of the cartoon’s frog inherent magic in online spaces.

The two films have a lot in common, not only for their similar focus on Pepe the Frog, but both can be read as an investigation into how a creator’s work was perverted and used by bad actors of the conservative right — Furie’s slacker amphibian being co-opted as an alt-right symbol and Packwood’s original theory being taken seriously by alt-right agitators and 4chaners to sow chaos.

Touching on the fields of semiotics and simulation theory, profiling a new-age health practitioner and several modern day chaos magicians and touching on the director’s own experiment in cultural isolation in Las Vegas in the aftermath of the 2017 mass shooting, the film is decidedly messy in its approach and unfocused with its argumentation as it casts a wide net around this kernel of an idea.Garrigus’ original investigation into the notion that “memes are chaos magic” is pursued with a fascinatingly abstract focus around American myth-making and internet political culture, but You Can’t Kill Meme tends to veer off course in the pursuit of some enigmatic tangent.

The interviewees selected for Garrigus’ film in particular seem to gesture broadly to memetic meaning while struggling to have their flailing talking points coalesce with the film’s theme. Unsurprisingly, self-ascribed “meme magicians” don’t make for the most engaging testimony. An anonymous man named “USER 666” is profiled about his use of chaos meme magic, and it is mostly him airing his petty grievances about the world while Garrigus’ camera captures him scrolling through 4chan.

Garrigus’ thesis is erudite and well researched, but the presentation and compilation of her talking points leaves something to be desired. As the more academic counterpart to Feels Good Man, its tendency to go on theoretical and abstruse digressions through meme and magic culture leaves its ultimate meaning difficult to parse amongst the arbitrary construction of her argument.

Its sweeping, esoteric analysis and “terminally online” visuals make it a curiosity that may pique the interest of those who, for whatever reason, are still interested in dissecting the online culture war spearheaded in the mid-2010s, but it is too all over the place to land on a satisfying summation to its sprawling investigation. You Can’t Kill Meme is about as pleasant as a scholarly spin on a 4chan rabbithole can sound, and if that is what you are interested in, this film is for you. Personally, I never want to think of Pepe the Frog or “meme warfare” again in my entire adult life.