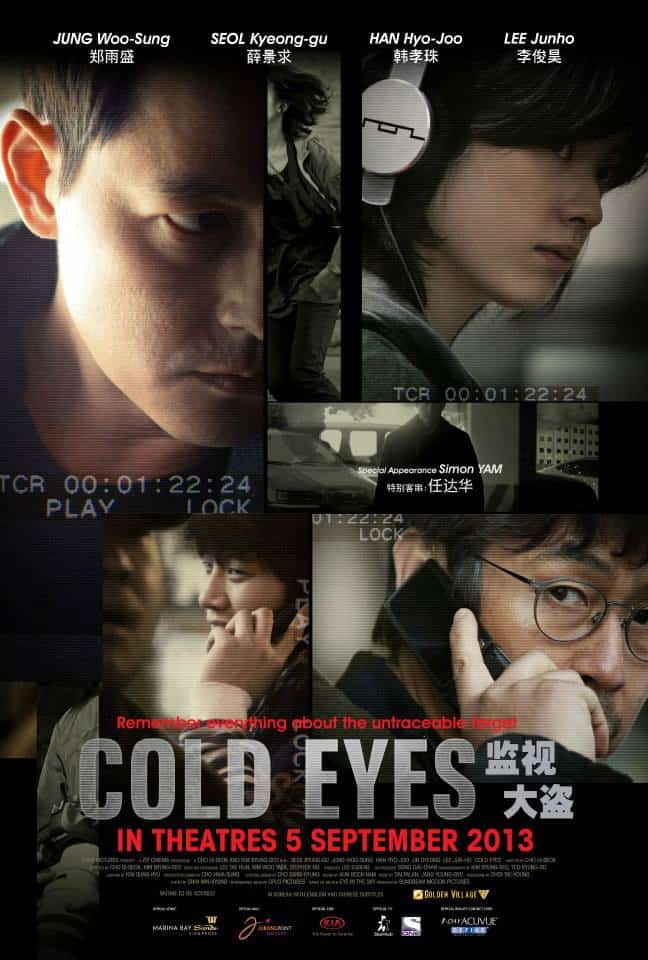 Some of the most intriguing and exciting films over the last decade have come out of South Korea, so I was looking forward to seeing and reviewing one of the country’s latest exports – Cold Eyes (Gam-si-ja-deul). Although the film does not equal more famous and lauded films, such as Mother, Oldboy, and I Saw the Devil, it holds its own over a two-hour run and is a solid effort from directors Ui-seok Jo and Byung-seo Kim and a large cast of cops and robbers.

The law enforcement wing is made up of a high-tech surveillance unit that is broken down into two groups – those manning powerful computers and gleaning CCTV footage and a field operations group made up of steely characters, each with codenames drawn from the animal kingdom. The two main members in the field are “Falcon” (Kyung-gu Sol) and “Piglet” (Hyo-ju Han). We are introduced to other field operatives and their codenames, but none of them are as central as Falcon, the field chief, and his newest hire, Piglet, a pretty young woman with incredible observational skills and photographic recall.

A string of robberies begin in the city, and the special surveillance unit gets to work finding the culprits.  They know there are five robbers involved in a hit on a bank, but they discover a sixth man who they capture on CCTV, and it is with him they begin their efforts. They determine that following the sixth man will eventually lead them to the other five, and when they use their electronic eavesdropping device to ascertain the gang’s next target, the surveillance unit finds itself in a strong position to stop the criminals in their tracks. Aided by their own armed tactical group, the team goes after the gang of robbers.

During their investigative surveillance, Falcon and Piglet realize that the group has a leader who has been overseeing the robbers’ actions. They give him the name “Shadow” as he is never seen at any crime scene. How they determine that he exists and who he is sufficient to follow him is a bit tricky and stretches credulity. Still, their tailing of him – often led by young Piglet herself – adds some suspense to an otherwise clichéd film, particularly given how slippery and dangerous the Shadow is. Do they catch him or does he get away? I must leave it unanswered for those who intend on seeing the film.

Cold Eyes is a perfectly fine caper film, well acted and well directed. As I said, it does not stand up to other South Korean films of a similar genre, but that should not be taken to mean the film is mediocre. It is quite good given the story it intends to tell and is compelling in some parts despite how little we know about any of the characters.  I would have preferred a bit more information the Shadow’s motivation and Piglet’s background. However, the film ignores these tidbits and quickly jumps into a nearly constant set of surveillance segments leading to an inevitable ending.

The last few minutes felt tacked on for no particular reason unless, of course, there is to be a sequel in which the surveillance unit goes after an even bigger mark. Despite some flaws including an over-reliance on trailing people and the aforementioned lack of backstory, the film was an easy and enjoyable watch going by quite quickly for 120 minutes. If there is a sequel, I would be interested in seeing it with the hopes that certain shortcomings would be fixed and a better film produced as a result.