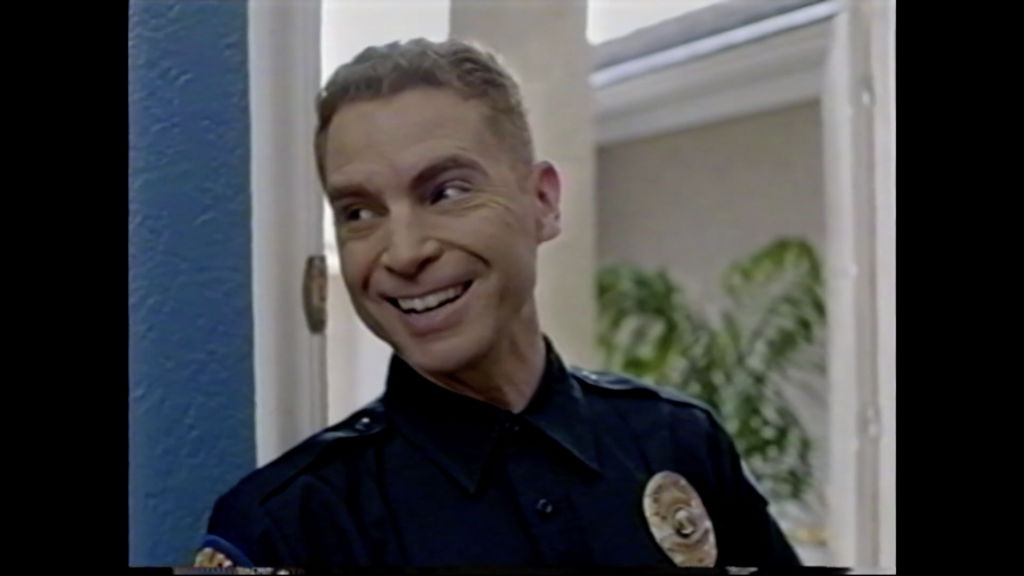 Created in perhaps the most turbulent time for law enforcement since the ’60s, Quinn Armstrong’s absurdist satire, Survival Skills, provides a rocky, yet powerfully searing, look at police and both the procedures and red tape that they must follow to the detriment of the public at large.

Uniquely presented as a lost training tape from 1988, the film lands somewhere between Jim Cummings’ exquisite Thunder Road and a darkly comedic short you might see on Adult Swim. In this movie within a movie, Stacy Keach portrays the narrator, training rookies on the policies and procedures of their survival on the force.

To do this, he presents a video of his own, which portrays a fictional officer named Jim Williams (Vayu O’Donnell) who is presented various scenarios and must properly address them, going by the book every step of the way.

Where things get interesting is when Jim is called out to a domestic violence disturbance and begins grappling with the procedures in place that prevent him from helping a woman and her daughter in need. As the stress of this case begins weighing on his conscience, he begins actively fighting against the narrator, desperately struggling to take control of his own life and to help a family in need, following his own humanity rather than outdated rules written in some book.

This constant back and forth between the rules he’s obligated to follow and what he knows is the right thing to do eventually grinds him down into an emotionless bootlicker, going through the motions of his day-to-day life while becoming dead inside.

At first, I found myself picking apart the ’80s-training-video aesthetic, noting the cruisers that looked way too modern and the fact that there’s no way an interracial couple would exist in such a product in 1988, but after the first 20 minutes, it becomes clear that selling this as a real training video isn’t the first priority of Armstrong, who adapted this from a short film of the same name.

Survival Skills works best in its final act, culminating in a dark, powerful finale that completely turned me around on it after a slow second act. What begins as a slightly goofy absurdist comedy transitions into a slightly surreal nightmare that begins to feel aimless before miraculously tying everything together in a poignant and tragically bleak satire that examines a broken police system.

Like Thunder Road before it and last year’s wonderfully absurd Greener Grass, Survival Skills struggles at times to stretch itself into a feature-film format, but Armstrong’s creativity and that hard-hitting climax are the saving grace that all but ensure this is one I’ll revisit again in the future.