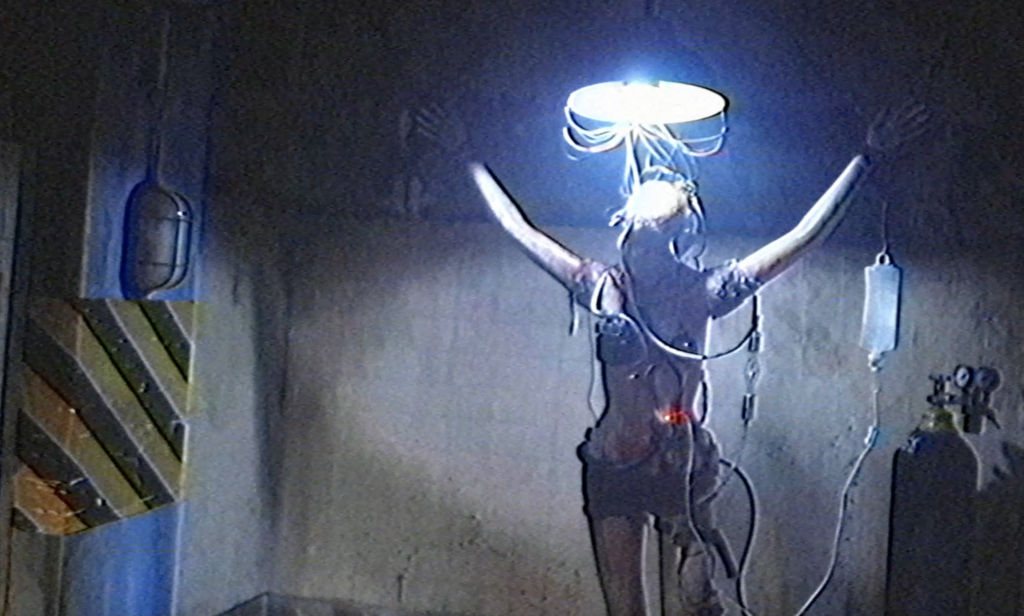 It’s been seven years since we saw the last entry in the popular anthology horror series V/H/S, and it seems that it was taking a much-needed break, as it’s back with its most astute offering yet, V/H/S/94. Composed of four segments along with a wraparound story to pull everything together, this new entry brings with it franchise alums Simon Barrett and Timo Tjahjanto as well as newcomers Jenifer Reeder, Ryan Prows and Chloe Okuno.

Each segment, while wildly different in plot and tone from the other, carries with it a more concise aesthetic this time around, in an attempt to more closely tie each story into a broader narrative that, although unremarkable, does set itself up for the possibility of a larger-scale V/H/S lore that I’d be very interested to see.

We begin with some grainy VHS footage of a SWAT team preparing to execute a raid on what they believe to be some kind of contraband warehouse, prepared to encounter a bunch of addicts and dealers. What they find, however, is a nightmare labyrinth of corpses, static-filled CRTs and plenty of horrific and creepy imagery.

The tapes they discover throughout this maze of terror are the four segments we witness, the first being some footage of a local news crew as they report on sightings of a dark, rat-like figure creeping around the sewers. Kicking things off on a high-note, this is directed by Chloe Okuno and features some awesome creature effects and a very creepy atmosphere.

This is followed up with Simon Barrett’s entry, perhaps the weakest of the bunch but still well made nonetheless. Like all the other pieces of footage, this takes place in 1994 (hence the title) and involves a young woman who is setting up a funeral home for a wake during a thunderstorm when some bad things happen. This segment just takes too long to build itself up, and the payoff, while again filled with solid effects, is a bit underwhelming.

Next is Timo Tjahjanto’s piece, who previously crafted the best of all the series’ segments in V/H/S/2, with a gory Frankenstein story that appears to draw inspiration from Tetsuo the Iron Man, Machine Girl, and maybe even Frankenstein’s Army. It’s largely shot in POV from the perspective of a young woman who was turned into an abomination of technology by a mad scientist.

Unfortunately she’s not the only person being experimented on, and there are some others who may not be as benevolent as she. The goriest and wildest of the segments, it feels like it lingers on a bit too long, but that absolutely batshit finale makes it work, the copious amounts of grainy, glitchy VHS shaky cam.

Finally, my personal favorite segment involves a group of super-right-wing militia members who believe they figured out the best weapon to fight America’s impending civil war. Directed by Ryan Prows, this fresh spin on a grungy vampire story is energetic, fun and chock full of crazy violence.

Everything at least appears to be shot on VHS or made to look like it; I can’t confirm they all actually were, which adds a tremendous amount to the atmosphere with the home video feel. The low- definition depravity of the visuals fit nicely into the underground tape-trading scene by which the film was certainly inspired. Even in scenes of relative banality, there’s just something unpleasant about VHS footage in general.

Examining V/H/S/94 as a package and comparing it to the others in the series, this is the most consistent of the bunch. Individual segments from some of the other entries (minus V/H/S Viral) may be more effective on their own, but I like this slightly new direction the series has taken, and I hope it’s the start of something we’ll get to see developed further in the future.