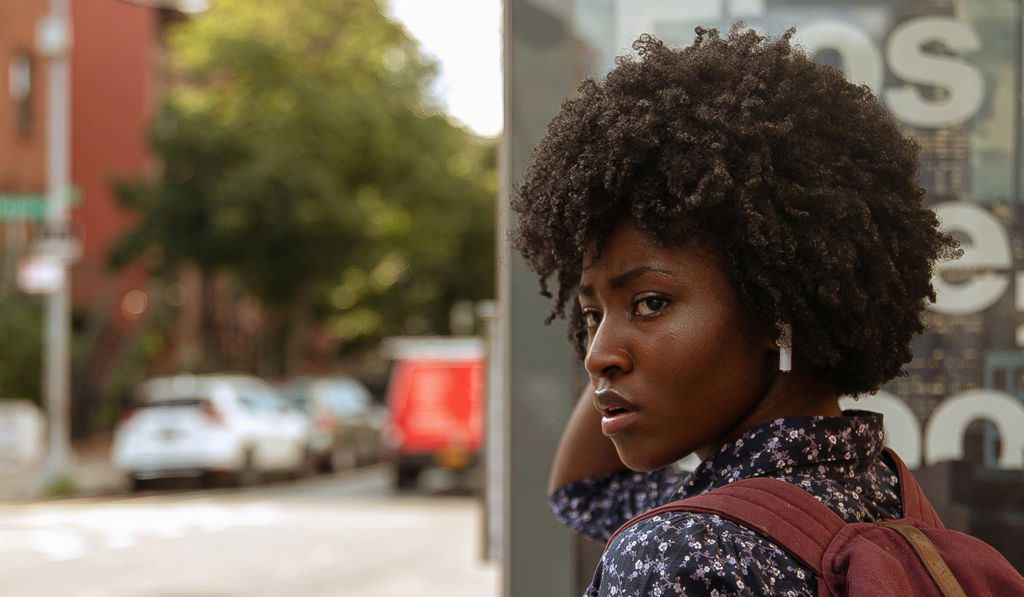 Looking down a narrow hallway, we see a shot of family life. A mother is seated at the table while a daughter sets it and the father cooks. Had we not followed these characters, experiencing events from each of their points of view, this scene would be ordinary. Writer and director Ekwa Msangi creates an environment in Farewell Amor where the typical is monumental, as every moment this family spends together is fragile.

After the civil war in Angola, Walter (Ntare Guma Mbaho Mwine) was able to come to New York City and work as a cab driver. He built a life for his daughter, Sylvia (Jayme Lawson), and wife, Esther (Zainab Jah), over 17 years. Now that they’ve finally joined him in the United States, there’s an urgency to repair and protect their relationships. But this constant maintenance is creating cracks, and what once filled those holes no longer does so it’s up to them to abandon idealized images and adapt.

The night after Walter is reunited with his family, he heads to a dance club after work. While there, he sees a woman. The loud, energetic music of the scene fades away, softening into gentle guitar, as he zeroes in on a woman to ask her to dance. Walter speaks in a raspy, quiet tone, but he’s not shy, especially when dancing, which is a shared passion of his and his daughter’s and even of a younger Esther.

His soft-spoken nature hasn’t stopped him from finding the woman, Linda (Nana Mensah), who flashes in his thoughts as he’s trying to be intimate with his wife that first night they were together. Linda is the “other woman,” and it was clearly serious, as they were living together and he has a bag of her sheets in his closet.

Early on Sylvia remarks that everything scares her mom, which is why she prays so much, and this sums up a large part of Esther’s current identity. She became seriously involved in religion when she and Sylvia lived in Tanzania, and the family’s first meal is marked by an intense prayer, one more appropriate for a congregation than a dinner table.

She uses her religion as a crutch, not only as support but also for justification. She often calls long distance to her pastor for guidance and makes her daughter pray when she disobeys her. She’s trying to keep Sylvia on the straight and narrow, far away from dance, but Sylvia just wants to be a normal teenager.

She’s reserved but, when she dances, she transforms. She does a full routine at the end of the film that’s absolutely captivating and solidifies this performative layer that was only briefly visible throughout the earlier part of the film.

Walter and Esther’s relationship in Angola is overshadowed by the civil war, and though their shared past and love of dance bonds them, so much time has passed that those reasons feel too thin to keep a family intact. There are missed opportunities to not only show their story in Angola, but also their separate stories and all that time apart.

Linda and Walter were living together, but all we know about Linda is that she’s a nurse, that she likes to dance, and that she was supportive of Walter throughout the immigration process as he tried to be reunited with Esther and Sylvia. We don’t know much about Walter and Esther’s family or friends in Angola, Esther’s church work or Sylvia’s dancing background.

The glimpses we get into their lives in their home country and those 17 years, aren’t sufficient to really answer the question as to whether they should have stayed committed or were better apart. Replaying the same scenes from various character perspectives deepens each individual but makes for a repetitive film that’s still somehow missing much of its “before.”

Farewell Amor could use some filling out and doesn’t necessarily answer it’s central question, but it does leave it hanging long enough to create some self-reflection.