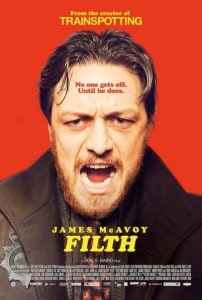 It has been a long time since I have seen such a surreal and psychedelic film as Filth.  Although it started strong, it became increasingly bizarre as the minutes rolled on, and by the end I had all but given up on the film’s main character, Bruce (James McAvoy).  It is not a long movie, but it is not a tight one either; it hops and skips from one thing to the next with perhaps the only constant being that Bruce misses his wife and child who have, for whatever reasons, left him before the film’s chronology begins.

Set in Scotland, the film begins in earnest when a young Japanese man is brutally attacked and killed by a gang of thugs.  We are introduced, one by one, to the investigative force that will be working the case through the musings of one man – Bruce – who wants promotion and proceeds to tell us how each of the other investigative team stack up against his own credentials.  Bruce is tapped to lead the investigation by the chief inspector in charge and he takes this opportunity to run his fellow officers out on a rail.  It is quite a funny few minutes and sets the tone for the dark comedy that is to define the rest of the film.

He spends his time trying to undermine his fellow detectives, ruining their chances for the promotion he so desperately seeks.  One avenue he chooses his sleeping with his married partners’ wives and delving into his colleagues deepest secrets, revealing them as it suits his purposes.  For example, he writes on the bathroom stall that one of the detectives gives head and eggs matters on further, so far that the chief inspector takes the detective out of the running because he does not believe a gay man can lead a squad.  Bruce will have sex with any woman, including a scene in which he attempts to get head from a 16-year-old girl.  He is also quite the junkie, stealing money from his friends to support his habit.  His actions are the very definition of “filth.”   Bruce has his own secrets, though, some of which are revealed or at least hinted at throughout the film.

There are moments of sympathy for Bruce despite his constantly despicable character and actions.  We see throughout that he misses his wife and daughter and are led to believe his actions are a result of his wretched state of affairs without them.  Indeed, there is some evidence that he might win back his wife and daughter if he got that promotion he so desperately wants, thus the sabotage he inflicts on the rest of the investigate team who are up for the same position.  But these moments are fleeting, and I was more repulsed by Bruce than cheering for him to succeed.  However, that says something about McAvoy’s commitment to character.  He does not try to be likeable and even when he gets semi-redeeming moments, his character somehow manages to ruin them.  As a character, he elicited no sympathy from me, but as an actor he deserves kudos for his high-wire performance throughout.

The film ends on a very odd note which I will not divulge.  It is presented as a bit of a mystery, but I would have actually cared to see what happened at that moment instead of rolling credits.  Instead, I just felt let down by all the craziness and incoherence that had come before and thus quickly found that I could not care less what happened to Bruce in those final seconds.  As much as I appreciate McAvoy’s talents as well as that of Eddie Marsan and Jamie Bell who co-star, I could not get into this movie and cannot fully recommend it even to fans of surrealist, darkened comedy.