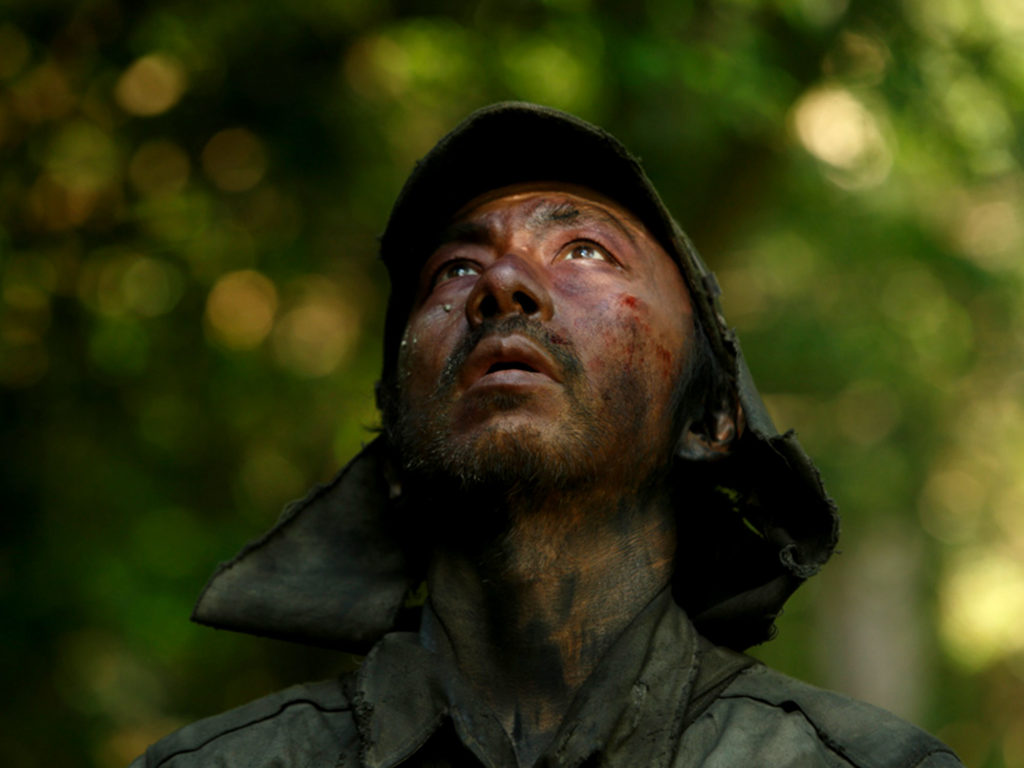 It is an understatement to say that Shinya Tsukamoto and Kon Ichikawa exist on two separate sides of the spectrum when it comes to Japanese cinema. While Ichikawa has been noted for his eclectic style and versatility with subject matter, Tsukamoto alternatively is narrow in his technique to the point where his idiosyncratic approach to form and theme borders on the dogmatic. So it begs the question: exactly what possessed the infamous cyberpunk director to tackle one of Ichikawa’s signature films and process it in his radically abrasive style?

The 1959 Fires on the Plain is a methodical and emotionally taxing portrait of degrading human nature in the throes of a demoralizing war, which — through Ichikawa’s slow, deliberate framing of human drama — lulls you into its own sense of despondency. The story of the tubercular Tamura (played by Tsukamoto himself in his version) cast adrift behind enemy lines in the jungles of the Philippines, attempting to survive the horrors of war while desperately clinging to his humanity, carries a scorching anti-war sentiment due to its refusal to shy away from the realistic conditions observed in combat.

In Tsukamoto’s case, the story is virtually unchanged from the original source novel by Shohei Ooka (although the Tetsuo director opted to restore Ooka’s original ending over Ichikawa’s more bleak denouement). The rapidly fading Tamura is still set loose to wander the endless thicket of Leyte in a despondent daze after being cast away from his squadron for his medical condition and refused medical relief due to the abundance of sick and dying. While foraging for food and slowly accepting the painful inevitability of his death, his morals are tested through fellow soldiers and civilians he meets through his odyssey, which is reminiscent of Greek tragedies.

Encountering former squadmates who have turned cannibal, Filipino farmers hunting soldiers for scraps, and consistent visions of his own encroaching end, Tamura experiences firsthand how low humanity can sink. His trek through the unforgiving greenery of the war-torn Philippines forces us all to encounter how susceptible the human species is to outright brutality if placed under the right conditions.

Tsukamoto draws the same conclusions as Ichikawa did, but in exploring the idea, he puts his signature spin on the material. Those familiar with Tsukamoto’s approach, as displayed in such films as Kotoko, Tokyo Fist and the more recent Killing, can probably assume with a fair accuracy what his take on Fires on the Plain would look like: frenzied, handheld cinematography and sudden bursts of visceral horror, balanced out by a cerebral and surreal meditation of the mind and body under duress.

In this case, Tsukamoto’s usual flourishes of the abject zero in on the carnage of war and the effect feels a disservice to the film’s overall theme. While Ichikawa could communicate the horror of combat through suggestion, Tsukamoto’s numerous bursts of excessive bloodshed feel like a thematic crutch passed off as a play for shocking realism.

His abrasive, sensual-overload style seems wasted on this material; pointing his frenetic camera at bloated, bullet-riddled, maggot-infested corpses or adding more scenes of graphic combat does not make his vision of war any more hellish than Ichikawa’s. It’s excess that feels misplaced.

Where Tsukamoto does reign himself in and where he truly focuses the film is around the more emphasized angle of PTSD in Tamura’s characterization. While present in the original, Tsukamoto’s frantic editing, discordant soundtrack and heavy use of flashbacks doubles down on the original implication and gives his film a more psychologically surreal feel.

In addition to the breakdown of Tamura’s body from illness and exhaustion, the 2014 Fires on the Plain expertly communicates that his sanity is decaying at an alarming rate. Outside of the more visceral qualities, when it comes to the physical dimensions of war and his application of signature style, this more explicit mental framing is probably the only thing truly different about Tsukamoto’s version.

It is handled well enough to justify the film’s existence, but otherwise the re-adaptation of Ooka’s work feels needless. It is entirely effective in its ugly portrait of war ravaged humanity but fails to escape the redundant reality of the same message wrapped up in a different look. To even ask a question like “did we need a remake of this?” is a foolish gesture, as the answer is usually “no” and we should normally treat a remake as its own film, untethered from the original.

I opted not to do that for this review because Tsukamoto made the exact same film (plot, themes and all) in his own distinctly singular way. The most enjoyment I had experiencing more or less the same film again came from the comparisons and the contrasts.