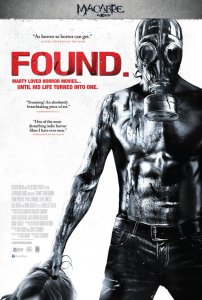 You wouldn’t know it judging from the generic cover, but Found. is equal parts extreme horror and coming-of-age story. It deals with dysfunctional family units, racism, and bullying, all while adding in some of the most disturbing scenes of horror I’ve seen in quite some time. This is a film that exudes controversy, from the dialogue to the extremely graphic imagery. It’s well made and impressively shot, especially considering its shoestring budget, but be forewarned, this is a tough movie that will linger with you far after the credits roll.

The film follows Marty (Gavin Brown), a young boy escaping into horror movies and comics to get away from the constant turmoil in his life. After exploring his brother’s room one day, he finds a severed head in a bowling ball bag. Now, on top of dealing with the onslaught of school bullies, Marty must live with the fact that his brother, Steve (Ethan Philbeck), appears to be a serial killer.

At first, it seems that Marty is able to live with knowing what Steve is, however one night while watching a horror film, he begins imagining his brother mimicking the awful actions of the killer on screen. Unfortunately, as viewers, we see what these awful things are and, without getting into too much detail, I’ll just say there was necrophilia, decapitations, and some eye-gauging involved.

This sequence proves to be the most gory and, while it wasn’t the most disturbing element of the film, it felt gratuitously graphic and unnecessary. Another aspect of the film that could have been omitted was the racial element. As it turns out, Marty’s brother and father are both devout racists, feeding Steve’s murderous tendencies. There’s already plenty of social commentary at work, and it seems pointless to tack this on too.

The most disturbing scene comes at the end of the film, which proves to be both shocking and incredibly well shot. The bulk of the finale all happens off screen, effectively making it that much more horrific and ultimately setting the stage for the final shot, which is absolutely brutal.

Independent horror movies are a dime a dozen these days, but Found. manages to harken back to the days when horror movies were more than just haunted houses and jump scares. It successfully left me unnerved and, if you’re in the market for it, is a truly disturbing piece of cinema.

The DVD release of the film comes with the full uncut versions of the two fake horror movies featured in the film, Headless and Deep Dwellers, in addition to an audio commentary by director Scott Schirmer and the author of the original novel, Todd Rigney. While the DVD quality is fine, I had to continuously turn the audio up as the audio track was extremely quiet.

Found. is much more than a typical bargain-bin slasher, and I can see this easily becoming a cult favorite someday. Casual moviegoers should steer clear of this one, but horror fans should absolutely check it out. Now, excuse me while I go watch some YouTube videos of puppies in order to palate cleanse my brain.