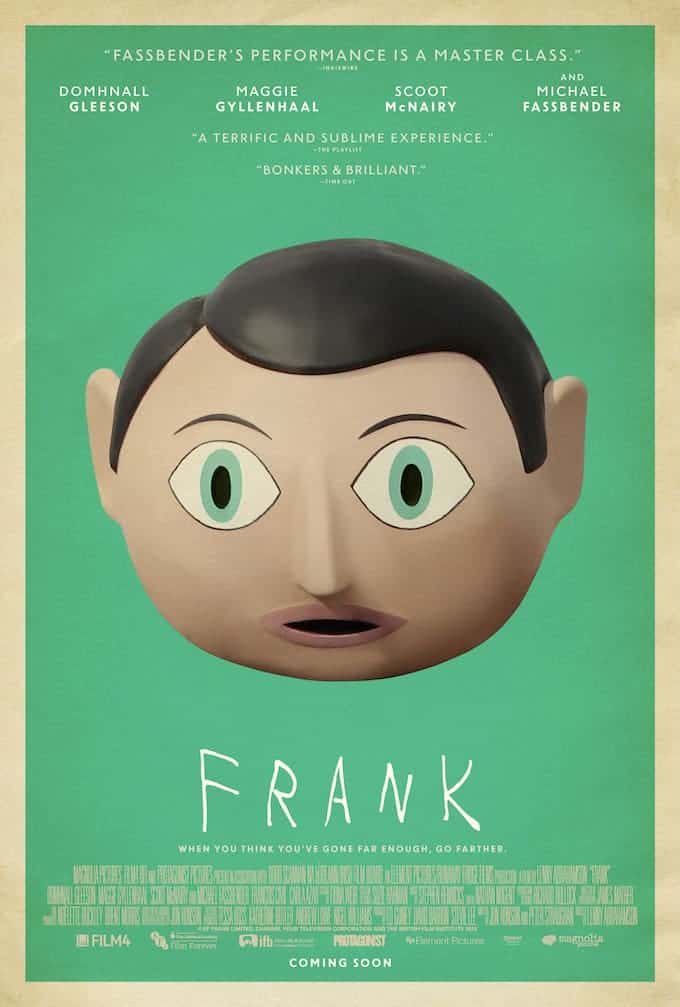 When striving for fortune and fame just how far are you willing to go?  How much are you willing to sacrifice?  Are you willing to do all you can to get noticed?  When opportunity knocks are you ready to answer or would you rather continue on your current path?  In Lenny Abrahmason’s film Frank, these are just some of the questions that Jon Burroughs must answer in his quest to become a singer/songwriter.

It’s easy to dismiss Frank as just another behind-the-scenes, rock biopic.  In fact it’s easy to assume that this will be a feel-good, underdog story like We Are the Best! perhaps.  You have a band coming to together to create a new album and they take their act on the road to reach the masses.  The film is not so much about the music but is really about the musicians themselves.   When we first see Jon he’s attempting to write a new song.  He doesn’t get far.  One afternoon he happens to be in the right place at the right time or is it the other way around.   Circumstances arise and he finds himself playing keyboard for an art-rock band.  When he arrives at the gig he discovers that the band is at odds with each other and that its front-man is a guy wearing a giant paper mache head.    Jon, like the viewer, is wondering just what their deal is.  Thinking he’s done Jon finds he absconded with the band as they attempt to create a new album and this is where the fireworks begin.

Frank features many great performances.  Maggie Gyllenhaal is Clara the Theremin player who always seems to want the band to stay where it is.  Arguing against breaking out and always bitchy she is not beyond threatening physical harm to make her point.   You can’t help but watch her and wonder just what her problem is and how in the hell is she still with the band, let alone wondering why.  Scott McNairy is great as Don the devoted, near-do-well band manager.  Domhnall Gleason is excellent as the film’s protagonist Jon Burroughs.  You can’t help but root for him and you are completely on his side as he tries to make sense of his band mates.  You’ll likely feel the same way he does about them and will likely revel his moments of success.  Of course, once invested you’ll feel kind of bad when events takes some unexpected twists.   Finally, Michael Fassbender is memorable as the titular character, Frank.  Spending the film with his face completely hidden you can’t help but wonder if he’s really under there.  However, you can feel his performance through that mask even if its expression doesn’t change.  Frank is a very layered character and the film is at its best as the layers are peeled away to reveal who he is.

Working from a screenplay written by Jon Ronson and Peter Straughan, Abrahamson has crafted an entertaining, satirical look at the music scene.  From the impact of social media to the creative process, they look at the characters and are not that focused on the music itself.  What music you do hear from the band probably isn’t for everyone.  Like they say one man’s Tiny Tim is another man’s Mozart.  There is so much more to this film than one may realize at the start.  How each character deals with every situation continues to peel away at their layers until, like Frank, we see what they are really made of.  Frank is a quirky, funny black comedy that is engaging, poignant, a bit introspective and memorable.