Demented children, creepy masks, yellow rain coats, and a ten-year-old Brooke Shields, this week in the grindhouse we’re taking a look at the 1976 horror classic Alice, Sweet Alice by Alfred Sole.  Probably the closest thing I’ve ever seen to American giallo, this well shot (yet poorly edited) slasher flick is surprisingly unsettling and has held up well in the 37 years since its release.

The film begins with single mother Catherine (Linda Miller) getting her daughter Karen (Brooke Shields) ready for her first communion.  From the beginning, it’s clear that Karen’s sister, Alice (Paula Sheppard), has some serious emotional and mental problems when she’s seen incessantly tormenting her sister.  During the communion Karen is brutally murdered and lit on fire by who appears to be Alice, wearing a yellow raincoat and freaky looking mask. 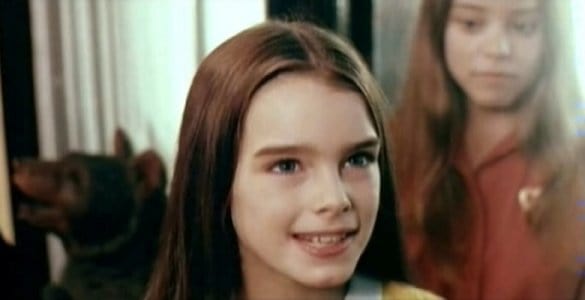 What proceeds is a police investigation by probably the most incompetent police force ever known to man.  While it initially seems clear that Alice is the killer, we find that seemingly everyone in this town wears yellow raincoats, and the seed of doubt is planted at about the halfway mark. 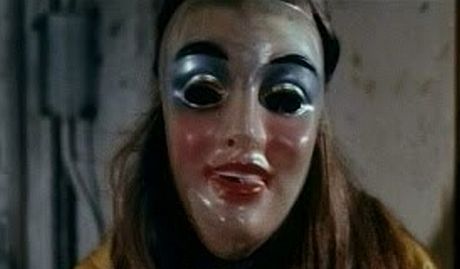 Tell me that’s not creepy

The brutal murder of a 10-year-old girl is a shocking way to start a movie, and director Sole doesn’t shy the camera away during the most violent scenes in the film.  The deaths are visceral and realistic looking; the kind of bloody violence that is rarely seen in today’s glossy HD film world. 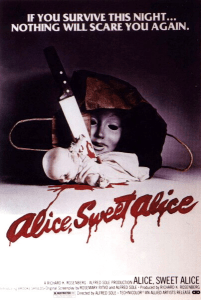 Though some of the editing choices feel disjointed, the overall look of the film compliments the gritty, dreadful tone of the plot.  As mentioned previously, it feels similar to the giallo films of Argento and Bava, which, if you read any of my thoughts on these films, is the highest of compliments.  That being said, it lacks much of the style of those classic giallos and sticks with a much more straightforward, linear, story.

Although I won’t say if Alice is the killer or not, in order to avoid spoilers for those that plan on see it, the reasoning behind the murders feels confusing and slightly ridiculous.  There’s definitely a grasping at straws vibe and while it is explained, it still seems preposterous.

Fortunately, this doesn’t detract much from film overall, and Alice, Sweet Alice still stands as a horror classic that is a must-see for genre fans.   It doesn’t have many jump scares, and while it is bloody, the level of gore isn’t over the top, but it’s still a film that gets under your skin and will certainly make an impression.