This week in the grindhouse we’re exploring the evil mutant baby film It’s Alive from 1974, written and directed by Larry Cohen.  Just a few weeks ago we discussed another Cohen film, Q: The Winged Serpent, which came out eight years later, however both films are equally campy and oddly scripted.  While not as fun as Cohen’s later films, It’s Alive still proves itself as being a solid cult flick that attempts to mask its exploitation under a layer of social commentary. 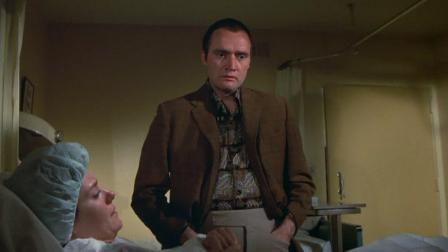 Ah, the old “My baby just killed a room full of people” look.

The film stars John Ryan and Sharon Farrell as Frank and Lenore, a loving couple about to have their second child.  Unfortunately that child is born a hideous mutant monster that immediately begins killing everyone the second it leaves the womb.  The police must then begin a massive hunt for the infant and end its killing spree.

The interesting thing about It’s Alive, is that it doesn’t focus on the monster and the killing so much as the effect of this baby on the couple.  Lenore is a complete wreck, sobbing and hysterical throughout most of the film.  She doesn’t want the authorities to kill her baby despite all the people it massacred. Frank on the other hand, initially decides to take an active role in ending the creature’s life, mostly because of the turmoil the thing has brought to his family.  He lost his job, becomes hounded by reporters, and needs to send his son away because of safety concerns. 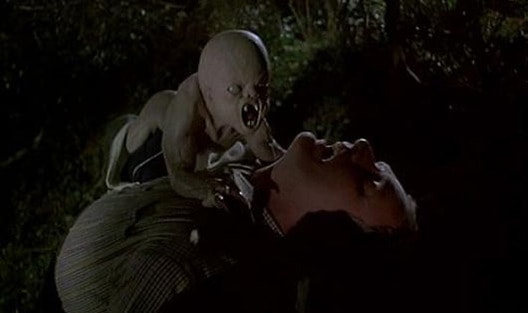 He didn’t see his day playing out like this.

Although it’s only briefly discussed in the first film, the reason for the mutation is the specific brand of untested birth control pills Lenore was taking before the pregnancy.  This finger wagging at big pharma is 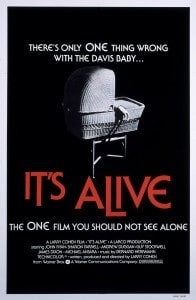 not really explored in great detail, and the concept of nature vs nurture a la Frankenstein is a more prevalent theme, especially in the first sequel.  There is a character in part two, however, who states he and his wife were having trouble conceiving when she mysteriously became pregnant with the creature. Moreover, in part three there’s a conversation that alludes to the defect being caused by prescription drugs as well, so who the hell knows.

It’s Alive spawned two sequels- It Lives Again in 1978 and It’s Alive III: Island of the Alive in 1987.  A remake of the original starring Bijou Phillips was released in 2008.  All the sequels including the remake were written by Larry Cohen and all but the remake were directed by him.  While all the sequels were surprisingly on par with the original, and possibly better, my personal favorite is part 3, only because of the added comedic elements and the fact that Michael Moriarty stars.

While it will never live up to other demon baby movies like Rosemary’s Baby, and probably shouldn’t even be uttered in the same breath, It’s Alive is a fun, if not forgettable, horror film.  The fact that there were two decent sequels that didn’t make me want to claw my eyes out while watching them is also a big bonus.