This week in the grindhouse we’ll be taking a look at Stuart Gordon’s follow up to his cult classic Re-Animator with 1986’s From Beyond.   Also based on a story by H.P. Lovecraft, this twisted little tale proves to be much weirder and less humorous than Gordon’s previous feature, but the gruesome effects work and oddball performance by Jeffrey Combs makes this well worth checking out.

The film centers around a couple of scientists who invent a contraption that is supposed to stimulate pineal gland, which will effectively result in a sixth sense.  Unfortunately, the side effect to this is the ability to connect with another dimension filled with hideous creatures that like to morph and bite people’s heads off.  After one of the scientists does indeed get his head bitten off, the authorities believe the other scientist murdered him and throw him into an asylum.

In comes Barbara Crampton, a hotshot young doctor who pulls the scientist, played by Combs, out of the facility in order to recreate the experiment.  Along for the ride is Ken Foree who plays a cop named Bubba, who acts as the doctor’s bodyguard. 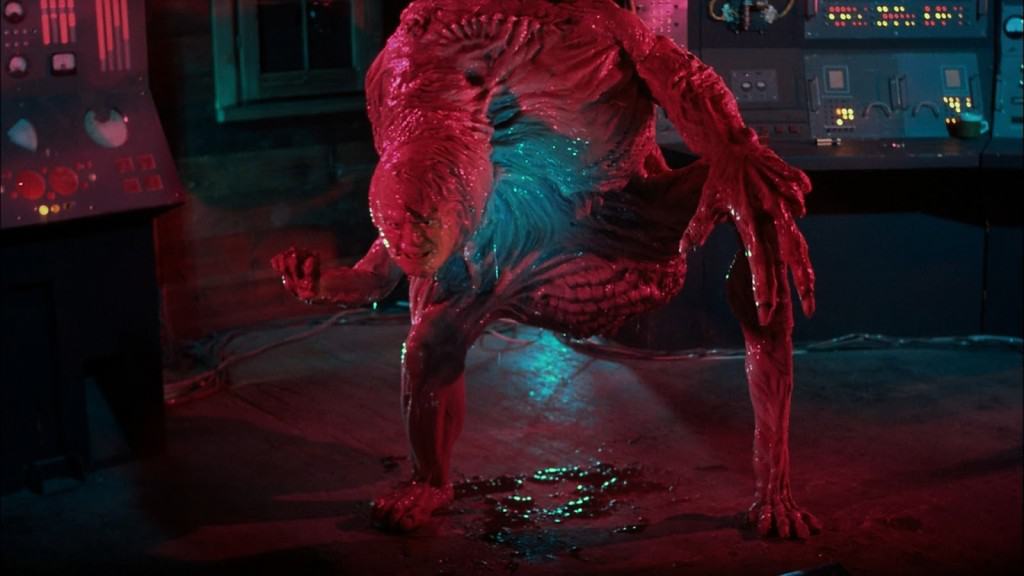 Of course, things go horribly wrong when the device is powered on and the creatures come back, this time with the previous scientist living in the other dimension as some sort of monster hell bent on devouring the world.

Although little of what happens makes any sense whatsoever, most of the effects work looks quite good, even for today’s standards.  Like John Carpenter’s The Thing, there’s plenty of ooze and blood, with 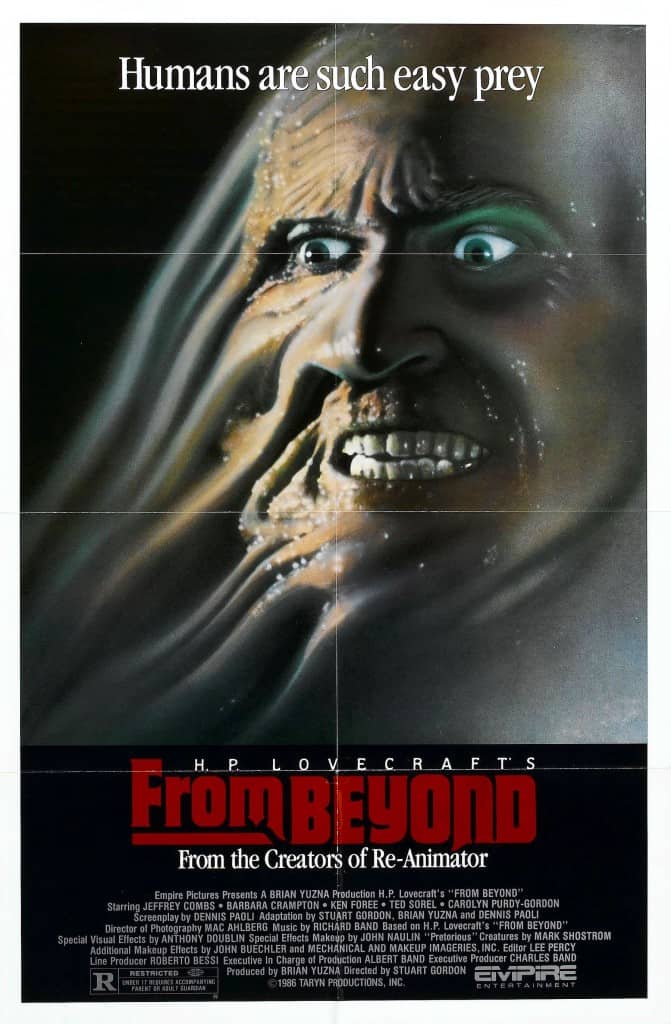 appendages growing and creatures constantly ripping out from other creatures.  Some of the puppetry used looks dated, but a lot of the smaller effects, like the finger growing scene, or the scene involving what appears to be a butthole on Jeffrey Combs’ forehead looks both gross and effective.

While From Beyond is considered a horror film, there’s little here that is actually frightening, especially by today’s standards.  You do get to witness Jeffrey Combs get all his hair eaten off by a giant worm creature though, and he looks pretty scary afterwards.   The horror elements fall more in line with the ultra gore variety, and for gore hounds there’s plenty to enjoy with this film.  One particularly disturbing scene involves Jeffrey Combs sucking the eyeballs out of people in order to consume their brains.  If that doesn’t sell you on this I don’t know what will.

From Beyond is a classic piece of 80s horror and should absolutely not be missed, especially for fans of Re-Animator or any other Lovecraft adaptation.  Fortunately, the good folks over at Shout! Factory released a special edition on Blu-Ray earlier this year, which I highly recommend checking out.