Many people know director Abel Ferrara for his provocative films like Bad Lieutenant and King of New York, but this week in the Grindhouse we’re going to be looking at one of his very first films, The Driller Killer.  This dirty video nasty stars Ferrara as a struggling artist in New York City as he succumbs to madness, gradually turning into a crazed killer.  Released in 1979, the film quickly became a cult classic and was met with a fair critical reception in the US, however it was immediately banned in the UK and didn’t see a release until 2002. 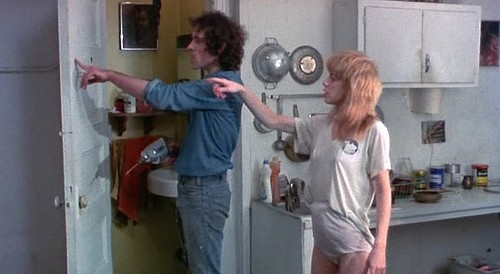 If she only knew what asking him to drill that hole would cause.

Reno Miller is a broke artist living in the Union Square area of NYC with his girlfriend and another roommate.  As he works to finish his latest masterpiece, a large painting of a buffalo, the stresses of life begin to get the best of him and he begins having dark fantasies.  After seeing an ad on TV for a device that can make any power tool portable, he decides to pick one up along with a drill in order to feed his growing blood lust.  What proceeds is Reno trying to balance his normal life, painting and attending punk rock shows, with his secret life of murdering derelicts with a drill.  As you might imagine things escalate and eventually come to a head in the bloody finale. 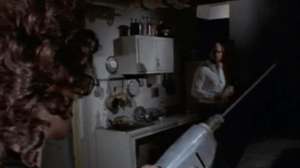 Spoiler: This dude is gonna get drilled.

Even though this was one of Ferrara’s first feature films, many of the key elements in The Driller Killer can be seen in his later works.  The film depicts a very dark, gritty portrait of New York, and features much of the sex, violence, and weirdness that would follow him through his later films.  While it could easily be considered a horror film, it doesn’t play out like a typical slasher.  The easiest comparisons to make would be such films as the 1980 version of Maniac or, to a lesser extent, American Psycho. 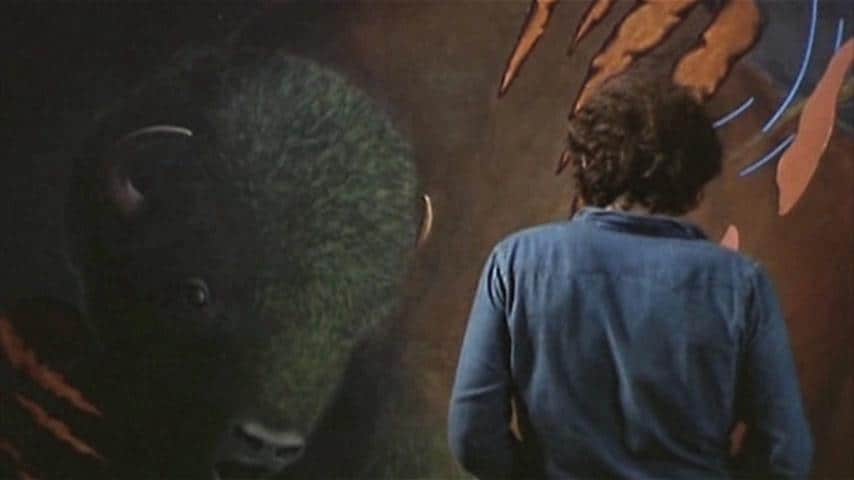 American Psycho took place in the 80s in New York, and also followed someone who was losing their mind, but the interesting contrast in these two films is that one depicted the clean, Wall Street version of New York, whereas the other showed the crime-ridden lower class side.  Both Reno Miller and Patrick Bateman are self-absorbed assholes who turn psychotic for seemingly no real reason.  Bateman chose 80s pop as his soundtrack, using the upbeat sounds of Huey Lewis, and Miller prefers noisy punk rock.  Both men start their killing sprees by killing homeless gentlemen, and both have a penchant for power tools.  Of course, there’s one fundamental difference between the two, however stating it would be spoiling American Psycho, but those that saw both films would know what that is. 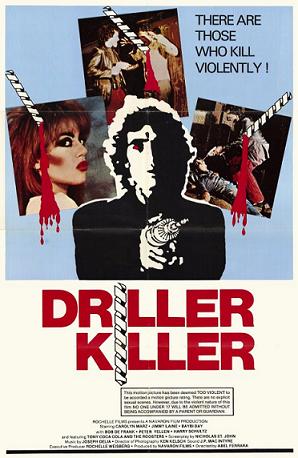 The level of violence in The Driller Killer is relatively high, however as discussed in previous articles and even on the Film Pulse podcast, apparently filmmakers didn’t know how to create stage blood properly back in the 70s.  The use of this bright red substance makes everything look like paint rather than life juice, which lessens the effect of the more disturbing scenes in the film.  That isn’t to say that there aren’t some particularly memorable kills, with the standout being a scene involving an unfortunate homeless man getting drilled through the skull.

As with so many movies of this era, the low budget quality only adds to the sleaziness of it all, and makes you feel all the more dirty after watching it.  Shot on 16mm, and in Ferrara’s actual apartment, the grainy, sloppy style helps accentuate the overall dread and crumminess of the tone.  Like Maniac, it’s a gross, dirty, unpleasant movie, that demands some sort of palette cleanser afterward.

As a fan of Ferrara’s later work, it was interesting to see his humble beginnings.  Compared to his last film, 4:44 Last Day on Earth, The Driller Killer is a masterpiece, but it’s still nothing more than a light recommend to horror fans, but Ferrara fans should definitely check this one out.
Because a copyright was never filed on this film, it is public domain and therefore available for free on YouTube. Here’s the full movie: