What happens when you combine Alien, Star Wars, and John Carpenter’s The Thing? 1982’s Forbidden World is what happens.  A low-budget sci-fi horror film that wears its influences on its sleeve in the worst kind of way.  The over the top violence and gore mixed with plenty of random nudity make it one of the ultimate science fiction exploitation films, and the fact that it was produced by Roger Corman solidifies it as something of a cult classic.

The film revolves around an intergalactic troubleshooter named Mike Colby (Jesse Vint) who is sent to a research station to take care of an experiment that goes wildly out of control.  After Mike has his way with one of the only two women at the facility, he gets down to business with attempting to exterminate the experiment.  Unfortunately, the creature breaks out of its open glass enclosure and begins killing everyone in sight.

As great as all that sounds, Forbidden World is thoroughly painful to watch and not enjoyable on any level.  The frantic, sometimes dizzying editing will leave most viewers confused and others having full on seizures.  The goofy 80s synth music doesn’t fit the tone of the film and feels completely out of place.  The set design, done by James Cameron, is generic and the lighting is so dark that one can barely see what’s going on. 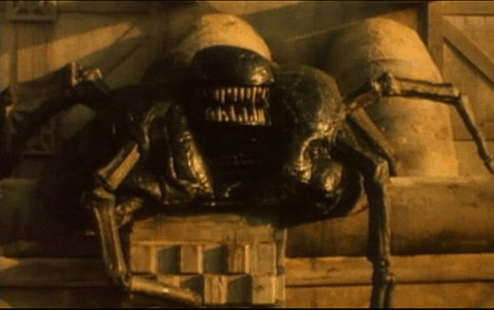 The creature looks like a direct copy of the alien from Alien, and it’s surprising that H.R. Giger didn’t sue the filmmakers.  If for no other reason, that it was a cheaply made rip-off that looked ridiculous.  Some of the other effects did look decent, however, and were fairly unsettling to see. 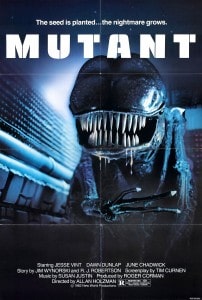 As most exploitation films go, this has a bevy of nude scenes despite only having two females in the entire film.  There’s the aforementioned sex scene with the protagonist and one of the women, which cuts back and forth between the sex and a guy watching them on a monitor playing with a toy. The second notable moment comes from a completely unnecessary, yet hilarious shower scene involving the two women.

Forbidden World is a chore to sit through and although I admittedly haven’t seen many sci-fi exploitation films, this seems bottom of the barrel.  It’s worth a few laughs, however most people will just be confused with the convoluted plot and sporadic, nonsensical editing.  Combine those things with some of the worst lighting I’ve ever seen and the result is something nearly unwatchable.