This week in the grindhouse, we’re going to be making another trip down under and talk about the Ozploitation classic, Razorback from 1984.  Directed by Russell Mulcahy, who was famous for his music video work including the iconic ‘Video Killed the Radio Star,’ this delightful cult gem is so much more than what the cover art implies.  While it is indeed about a giant killer boar, there is a genuine quality to the script and visuals that easily puts it in a higher pedigree than a typical monster flick.

The film begins with a horrific scene involving a murderous razorback smashing through a man’s home, stealing, and presumably eating his child.  This gives the viewer a decent idea of what they’re going to be dealing with throughout the 95 minute runtime- a horse-sized boar that literally rips through houses and randomly eats people. 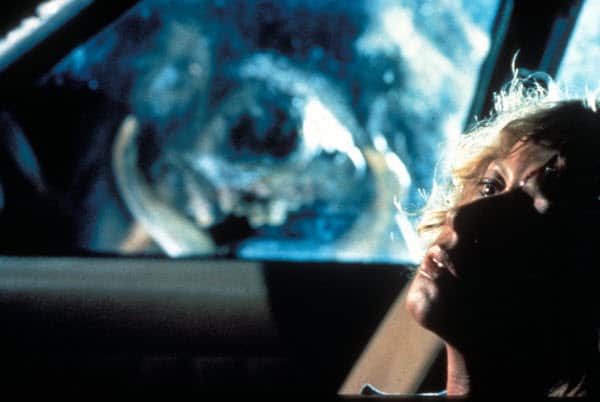 After the intro we head over to the other side of the world and meet two of the film’s protagonists- Beth and Carl Winters.  Beth is a spunky American journalist who heads to the Outback to report on kangaroo hunting.  Unfortunately, the hillbilly townsfolk don’t take kindly to her and things get messy.

At this point it becomes evident that this is going to be nothing like what one might expect.  After a brutal assault by the local redneck tribe, Beth, who has been the main character of the film up to this point, is viciously killed by the razorback.  Like Hitchcock’s Psycho, this event comes completely out of left field and proves to be quite shocking.

After Beth disappears, her husband Carl heads to the small town and teams up with the father of the boy who was killed at the beginning in order to bring the beast down.  Unbeknownst to him, he’d also have to deal with the hillbillies who nearly raped his wife before she died. 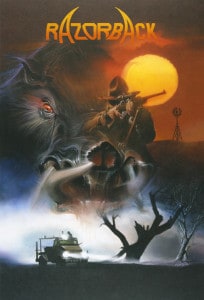 While there’s a lot going on in Razorback, the film in general plays more like Wake in Fright than something like Rogue.  More time is spent on the characters and their journey than actually showing the boar do his thing.  Even during the action scenes when it’s attacking, the viewer only sees brief glimpses of it, which actually turns out to be more effective.  As this was a low budget production, it was a much better choice to focus in on the parts that do show the beast, rather than trying to create some hokey animatronic thing that looks bad.

Mulcahy’s experience with music videos definitely shows within he visual aspects of Razorback.  The film is filled with interesting transitions, cuts, and framing choices, not to mention the great use of light within the pitch black desert landscape.

After watching films like Road Games, Dead End Drive-In, Turkey Shoot, the Mad Max series, and now Razorback, it’s clear that Australia is becoming my country of choice of classic exploitation cinema.  While this film may not stack up against the best Aussie flicks out there, it’s still a cult classic that should absolutely be checked out.

One Response to “Grindhouse Weekly: RAZORBACK”