This week in the grindhouse we’re taking a trip up North for some Canuxploitation with the absolutely terrible sex comedy Screwballs from 1983.  In an example of exploitation at its purest, this film features almost no discernible plot other than that there’s a group of high schoolers who are seemingly trying to sexually assault and harass every girl in school.

Directed by Rafal Zielinski, Screwballs takes place at a high school in the 1960s, and follows a group of perverted teens as they try every trick in the book to see some boobs and maybe get laid.  It basically plays out like Porky’s or Fast Times at Ridgemont High, only completely devoid of any comedy or story.  There is a thin through-line, involving the friends competing to hook up with apparently the only girl in their school who is still a virgin, however the bulk of the film is broken up into stand alone set pieces. The friends attempt to execute an elaborate plan to see some T and A (which is coincidentally the name of their school), they fail miserably, rinse and repeat. 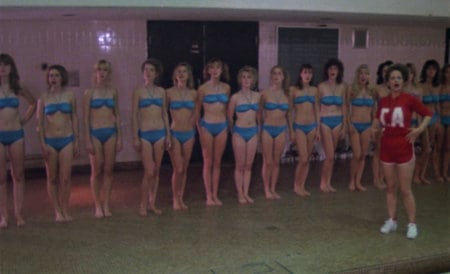 The lengths at which these assholes go to spy on girls without their clothes on is disturbing at best and criminal at worst.  From burying themselves in sand in hopes that a girl would lay near them, to building large electro magnets and sewing metal into homecoming dresses in order to rip them off, these guys never quit.

One classic scene involves some particularly crazy shenanigans at a reception for the school’s newly built airplane repair shop, where one of the bros dumps a bottle of Spanish fly in the punch bowl, effectively making everyone go crazy and make out with each other.  The craziest aspect of this scene is that an airplane repair shop was built in a high school for some reason. 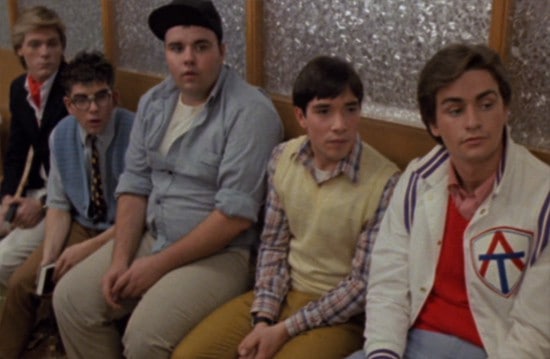 The preppie, the dork, the fat kid, the newbie, and the cool guy

While it could be easily considered so bad it’s good, Screwballs simply isn’t that much fun to watch.  The comedy is low brow, as one might expect, however it’s not even the slightest bit funny.  At times the film resorts to Benny Hill style fast forwarding to generate laughs, which is ridiculous and horrible. 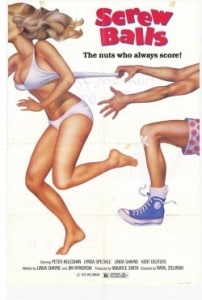 If you do happen to check out Screwballs however, and find its brand of humor endearing, there’s actually a sequel that is essentially the same exact film.  Titled Loose Screws, the second installment takes place in the 80s, and although some of the same actors return, there’s no connection to the original.  Unless of course you look at the plot which is exactly the same, with a group of asshole kids attempting to make it with their French teacher.

Sometimes you may be in the mood to check out a goofy 80s sex comedy and Screwballs will certainly fit the bill, however with the multitude of better choices from this era, there’s no reason to settle on this one.  It’s understandable that you would check your brain at the door for a film like this, but the plot is so grating that it’s hard to enjoy this on any level.