If you’ve ever wanted to hear the soothing and soft-spoken voice of singer James Taylor drop the F bomb during an existential road trip movie, then Monte Hellman’s 1971 carsploitation classic Two-Lane Blacktop is the film for you. Like many other films of this era, including Vanishing Point, Easy Rider, and Electra Glide in Blue, this odd little film features sparse dialogue, a stark, pre-interstate Route 66 backdrop, and metaphors a plenty. 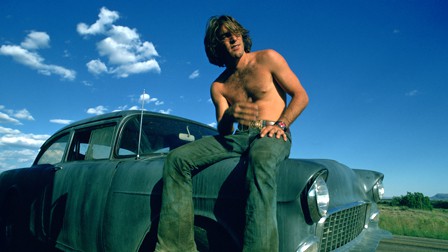 James Taylor plays The Driver, a man of little words driving cross country with his mechanic buddy, The Mechanic, played by Beach Boys drummer Dennis Wilson. Along the way, a random girl, played by Laurie Bird, hops in their car and goes along for the ride. This scene is the first of many odd interactions throughout the film, as The Girl just gets in the back of their car, and they simply drive away- no introductions, no questions. Warren Oates plays G.T.O, a man they meet and decide to race across the country for pink slips for some reason. This leads to some even more strange interactions throughout the film, adding to the minimalist and (possibly unintentionally comedic) tone.

On the surface, Two-Lane Blacktop feels like every other road trip movie from the seventies. The characters are meandering through life- driving with no clear purpose. But when you start to look at the film as a whole, it becomes evident that there’s a lot going on with this film despite the seemingly simple concept. Much the main characters’ Chevy, it’s stripped down to the bare bones. Everyone is a nameless face with no real sense of purpose other than to keep moving. The characters show little emotion and we never really get to know who they are or where they end up. The Driver and The Mechanic are men of few words , however G.T.O. is the polar opposite. His journey has him picking up hitchhikers along his route and telling each of them a fictitious version of his life story. One particularly interesting encounter involves Harry Dean Stanton as a gay hitchhiker attempting to pleasure G.T.O. who is not having it. 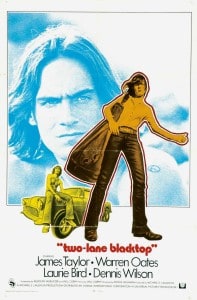 The cinematography compliments this minimalist narrative in every way possible. From a brilliant scene involving The Driver and The Mechanic silently eating at a roadside diner, to the final, majorly ambiguous, ending, this film is a visual slice of Americana that is deserving of the “classic” moniker.

Two-Lane Blacktop is the type of film that can be endlessly analyzed and thought over- one that can be interpreted dozens of ways. It’s a film that can be re-visited over and over and looked at from different points of view which will result in a completely different takeaway each time. Maybe you look at it as a film about the road itself, or maybe it’s about a lost girl trying to find her way home, or maybe it’s not about anything at all and it’s just a poorly scripted exploitation flick cashing in on the success of Easy Rider. Either way, it’s a film that is absolutely worth checking out and a highly recommended watch. “Make it three yards, motherfuckker, and we’ll have an automobile race.”