We live in a world where the majority of us are in some way connected to each other even if we aren’t in the same physical space.   Smartphones at the ready we are a mere call, Skype or Facetime away from connecting with someone.   Despite connecting with a physical being we depend on that technology to bridge that gap.   While we know, well hopefully know, that there is another person on the other end we have reached the point where we have begun to interact, especially anyone with an iPhone, with an artificial intelligence.  Enter Siri.  We innocently ask her questions sometimes getting some cute answers.  How far away are we from having a fully developed artificial intelligence that we can interact with, that will cater to our every need?   Is this science fiction or are we just a few cycles away from science fact?   Spike Jonze’s latest film Her looks at that intriguing possibility.

Theodore Twombly is a lonely guy in the big city.  Having recently gone through a tough separation with his wife he lives his ordinary life day in and day out.  He goes to work,  comes home, plays some video games, goes to bed and the cycle starts anew.   One day he sees an ad for a new operating system that promises to cater to its user’s needs.   Curious he gives it a try.   The operating system will learn about their owner and is designed to develop a working relationship with them.  The OS can also develop beyond its programming so that it can better serve the user.   When Theodore and his OS, self-named Samantha, begin to develop feelings for one another their relationship takes them on a journey full of surprises and wonder. 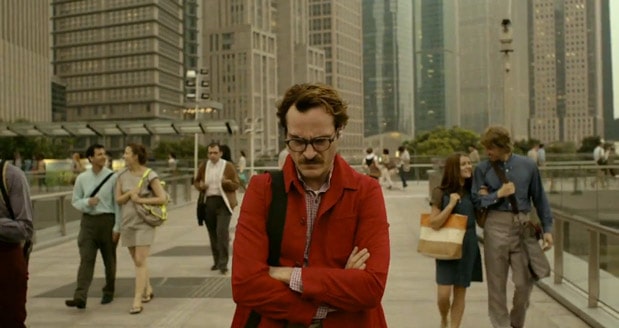 Spike Jonze has created a fascinating near-future world that doesn’t seem that far from the truth.  It’s not a question of how but how soon.  We are so dependent on so much technology that it’s often hard to fathom how we ever went without.   Unlike many future world films like Blade Runner or Minority Report the world isn’t that far removed from what we know now, it’s not as bleak as one would expect.   There is so much “virtual” go on nowadays how much further do we have to go before people start openly dating virtually?   Jonze’s screenplay, the first he’s ever written that he himself directed, tells a touching story that is strange, romantic, funny and fascinating.   As the relationship between Theodore and Samantha develops the question always lingers is if this is for real or not.   After all, she’s an artificial intelligence, she’s programmed, it can’t be real.  Or can it?  We as humans are technically living and breathing computers that have a corporal form so how is an A.I. any different?  It’s an intriguing idea that Jonze examines so purely and innocently that you can buy into this reality and again you must ask how far are we from this coming to fruition.

Thanks to the performances of Joaquin Phoenix, Amy Adams and Scarlett Johansson the viewer is easily buys into Jonze’s look at the future.  Phoenix gives yet another great performance and disappears yet again into his character.  You can feel his loneliness and his fear, joy and excitement as his relationship with Samantha develops.   Scarlett Johansson gives perhaps one of the best voice-over performances ever.   As the voice of Samantha she really gives the OS uniqueness and charm that can be disarming.   Despite not physically seeing it you can hear through her inflections how she is growing and learning as a being.   We know she’s a program but she doesn’t behave like one.   Amy Adams also appears as Theodore’s friend who seems to be living the same life as Theodore but doesn’t have an OS to enrich her life.   Rooney Mara stars as Theodore’s wife and Olivia Wilde plays a blind date in a rather amusing scene. 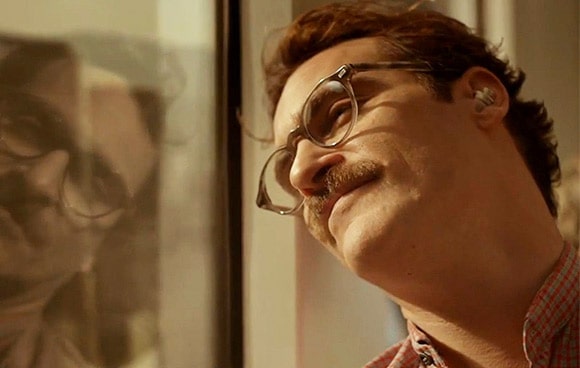 Spike Jonze’s look at the future of relationships is an intriguing and sweet drama/romance.   In a society filled with non-traditional relationships and more acceptance of such is the world ready for this kind of a connection?   It doesn’t let itself get caught up in the minutia of the situation instead it just handles it matter-of-factly thereby drawing the viewer into a more accepting state of mind.   Yes it’s a strange relationship but it works, it feels natural, it actually feels real and is often cute.   Her will certainly raise eyebrows, intrigue minds and warm hearts.   It’s definitely worth a look.