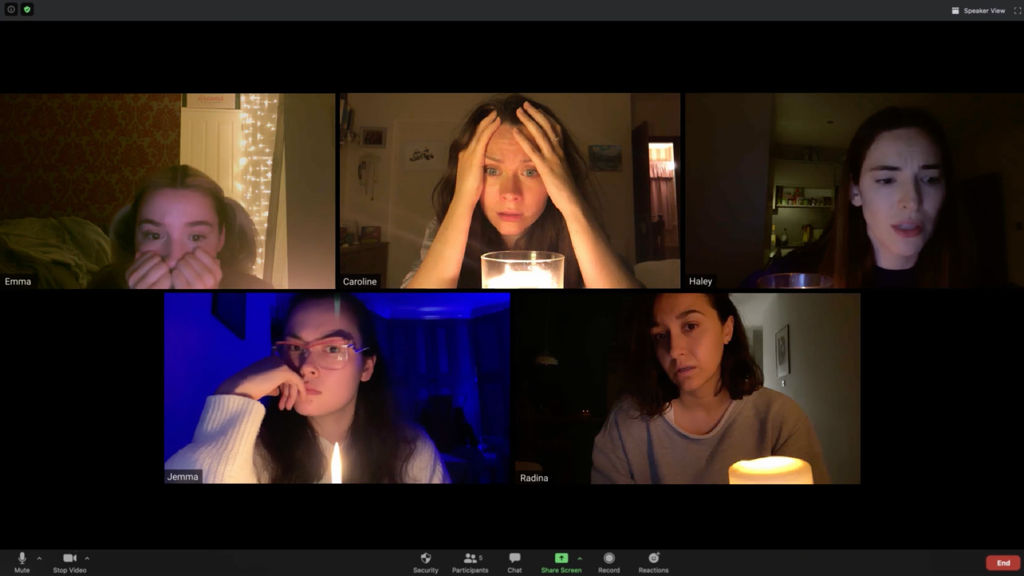 In recent years, we’ve seen the found-footage mechanic slowly but effectively branch off into another method of delivering low-res, DIY-style storytelling in the form of ScreenLife, the brainchild of director Timur Bekmambetov, in which movies are created entirely on computer, phone and tablet screens.

Though the market hasn’t been necessarily flooded with these titles, a number of notable and successful films have been created in this style, like 2018’s Searching and the Unfriended series. Now, in the midst of a global pandemic that forces us to socially distance and stay within our homes, it seems that the current landscape is rife with opportunity for this format to generate plenty of new content from creatives.

As a critic, I was dreading the onslaught of poorly made COVID cash-ins that we will certainly be seeing over the next year or more, but thankfully one of the first feature films shot during the lockdown is surprisingly well crafted and effectively scary, despite its penchant for cheap jump scares.

Host is directed by Rob Savage and involves six friends who want to stay connected through the pandemic; they decide to hire a medium to perform a seance over Zoom, a popular video conferencing platform that most of us are sick of using and hearing about by now but that may need to be explained for future readers of this review.

Structurally, Host plays out like any slow-burn, found-footage-style horror film. There’s a lot of setup, punctuated with a bloody conclusion, but the formulaic nature doesn’t inhibit the scare factor or make it less entertaining.

It’s a scary world we’re living in right now. As of this writing COVID-19 is still tearing through the U.S. like a plague, and the death toll is climbing every day. This looming fear, combined with the isolation of staying home as much as possible, allows horror — even that of the supernatural variety — to pack a more distinct punch.

After one of the friends bungles the seance by making up a story and inadvertently opening the door for a malevolent spirit to come through, everyone who was involved in this cursed Zoom call is now infected by this apparition.

Bolstered by a surprising number of effects, Host blends a substantial amount of atmospheric terror and jump scares, making for a vastly more tense conference call than most of us have been experiencing during these times.

The premise, while simple, is elevated by the Zoom format, allowing for some interesting flourishes — such as the exploitation of Zoom’s background feature to add perhaps one of the most effective scares in the film.

Unlike other ScreenLife-style movies, Host is presented entirely on Zoom, so there’s no frantic clicking and internet research going on, just five or six people having a chat and getting terrorized by a ghost. Even the end credits are presented through the platform, a fun little touch that shouldn’t go unnoticed.

Savage is also smart enough to know exactly how long to maintain a story like this, bringing the runtime in at a brisk 56 minutes, allowing time for both a meaty setup and an explosive finale without causing the proceedings to crumble under its own gimmick.

Perhaps it was my relatively low expectations going into it, but Host is a fun, scary and surprisingly well formed horror feature that uses our current socially distanced climate to its advantage.