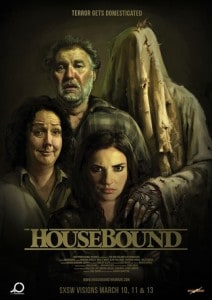 Horror-comedy is a genre that you seldom see much from nowadays. In recent years you’d have to look to films like Shaun of the Dead, Slither or Zombieland to deliver the shrieks and guffaws. The genre’s offerings can take many forms, such as flat-out parodies (like the Scary Movie franchise), self-aware films that scare you while letting you in on the joke (like the Scream series) or films that deliver exactly what the title promises (like Killer Klowns from Outer Space).

In the ’80s, there were a number of horror films that not only delivered the scary moments but some genuinely funny ones as well. Films like Evil Dead 2, Dead Alive, The Return of the Living Dead and Steve Miner’s House are just some of the best that the genre has to offer. Gerard Johnstone’s feature film directorial debut, Housebound, is a highly entertaining, refreshing and original throwback to those great horror-comedies of the ’80s.

After a botched robbery, Kylie Bucknell (Morgana O’Reilly), is placed under house arrest and is forced to move back into her childhood home. Her punishment becomes intolerable as she must now live under the same roof as her mother, Miriam (Rima Te Wiata), a woman who loves to prattle on about how the house is haunted. Of course, Kylie doesn’t believe her mother’s childish superstitions but starts to notice some peculiar things going on in the house. Is it her imagination? Is she losing her mind? Is her mom actually telling the truth? Kylie decides to find out.

The film’s trailer will likely lead you to believe that this is nothing more than another ghost story. In fact, the trailer puts a bit more emphasis on the horror elements as opposed to the comedic ones. This really isn’t a horror movie per se, but it does have some moments that’ll make you jump. It is much more akin to a mystery with some horror and deadpan humor mixed in. Written and directed by Johnstone, the film really keeps you engaged in the mystery that Kylie is trying to solve, and, thankfully, when it all comes to a head, it doesn’t disappoint.

The film is spearheaded by O’Reilly’s fantastic performance. Her reactions and deadpan delivery to many of the situations she faces will either have you cringing in fear for her life or laughing your ass off. Thanks to her, Kylie’s character comes off as a resourceful and smart wise-ass you can’t help but root for. Rima Te Wiata is also very good as Miriam. She steals just about every scene she is in. Not to be forgotten is Glen-Paul Waru, who plays Amos, a local officer who must check in on Kylie whenever her ankle bracelet starts going off. The banter between Kylie and Amos is often quite funny.

Housebound is one of those films that is best enjoyed when you know as little about it as possible. Having only seen the film’s official trailer, I knew very little of what to expect, and it turned out to be quite the surprise. And I am not giving anything away, but there was one scene in particular that had me, as well as the audience, laughing as it unfolded and mere moments later something that wasn’t funny occurred but I, and the audience, was still laughing at what unfolded prior. Genre fans will be pleased by this discovery from New Zealand, and filmgoers in general should find it entertaining as well. It’s one of the better genre films to come out in recent years and could very well end up being one of the its best offerings.