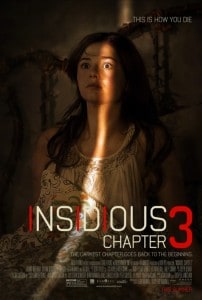 When you hit the proverbial wall, it seems like the next logical step would be to go backward. In the case of the hit supernatural franchise Insidious, it seemed like there was nowhere else to go after two films covered the events of the Lambert haunting.

In fact, the route filmmakers eluded to at the end of the second film just felt tacked on and pointless, such that the franchise would have become a parody, no matter how scary and creepy they tried to make the third installment. So having hit the logical end of the Lambert story, the filmmakers decided to go back to the beginning in this less-than-inspiring prequel to the Insidious saga.

Hoping to contact her late mother, young Quinn Brenner seeks the aid of psychic Elise Rainer (Lin Shaye). When Quinn meets Elise, she discovers that Elise has retired from the paranormal business, due to some disturbing circumstances.

However, against her better judgment, Elise decides to help and discovers that a dark and troubling future lies ahead for not only Quinn…but also for Elise herself. Quinn, her father and her brother are in grave danger when an evil presence in their apartment building begins taunting and harassing her. Elise is the only one who can help them, but she’s not even sure if she has the courage or strength to assist the family, let alone survive.

When I go to see a horror film, I expect the jump scares. They can be fun, but I want (and expect) substance along with those scares. If I want cheap scares, I’ll go to Universal Studios’ Halloween Horror Nights. I don’t want to just be scared; I want to be bothered; I want to be disturbed.

If you startle me, that’s par for the course; you’re supposed to do that. If you fill me with genuine dread and provide a compelling and engaging story to go with that, it will go a very long way. I didn’t get that with the previous two Insidious films, and didn’t get it with the third chapter in this series. I certainly found it in James Wan’s The Conjuring, in Inside and in The Others – but not with this franchise. 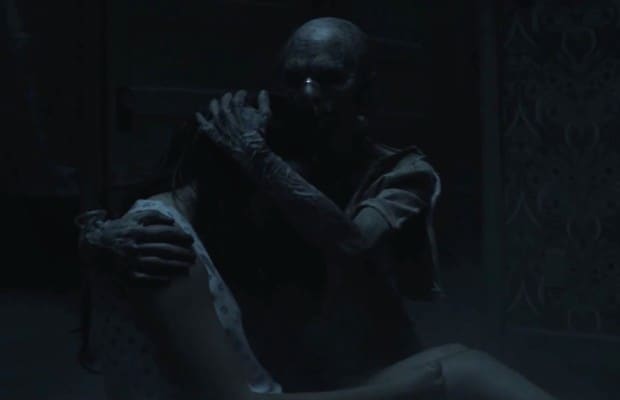 The story was written by Leigh Whannell, who also makes his directorial debut, resulting in a mixed bag of good and bad. There are some affective jump scares in the film, but as a whole, it just didn’t completely work. It would have been better if it really focused more on the character of Elise, as opposed to the family in peril. Oddly enough, when the film focused on them, I was taken out of the movie – more on that in a bit.

Shaye, Whannell and Angus Sampson reprise their roles from the previous films, with Shaye’s Elise Rainer returning as the most interesting character. Though her appearance in the second was a bit contrived, her story could have easily fueled a standalone film. Instead, we are spoon-fed some not-so-subtle and unnecessary tie-ins to the first film. It’s as though they felt the audience may have forgotten who she was and what her history is or, in this case, what Elise’s destiny will be.

Shaye easily outshines the rest of the cast. You really get a sense of the terror Elise feels when she must tap into her psychic powers, and her backstory is very interesting and well performed. Dermot Mulroney stars as Sean, Quinn’s father, and Stefanie Scott plays Quinn. What is there to say? None are very convincing, especially Mulroney. You just get the sense that he wasn’t buying into the story at all. As a result, whenever he was on screen, you get drawn out of the film and don’t see the character, but rather the actor.

There are moments that you’d expect a father to pause to assess just what the hell is going on here, but those beats are absent. There are things that happen to Quinn that should terrify the hell out of any average person, but you really didn’t get a sense of that abject terror. Tate Berney appears as Quinn’s brother, Alex, and does what he can with a pretty pointless character.

You can likely guess that I wasn’t a fan of this series. Going into this one, I really didn’t have a great deal of memories from the other films. For all intents and purposes, I was going into this one as though it was Chapter One, and all it did was remind me of why I didn’t like the other two in the first place. Sure, I may have jumped a few times, but unlike other really-good, genuinely scary supernatural films, nothing stuck, and this one will likely be forgotten.

It’s time to exorcise this franchise and leave it dead and buried.