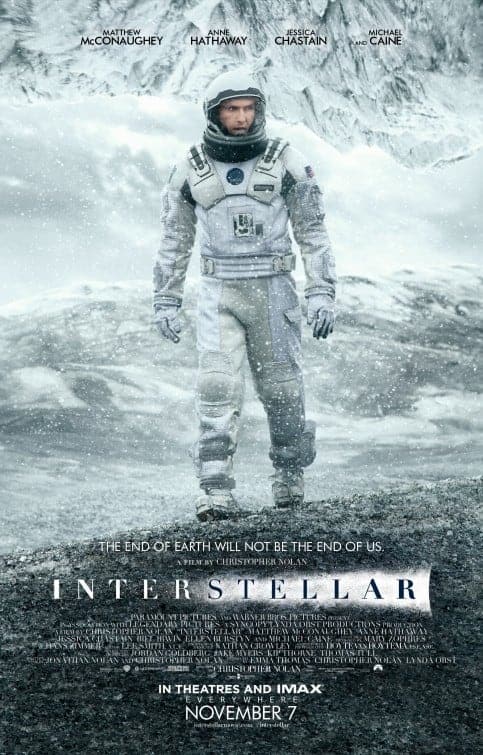 In a seemingly not-to-distant future, drought and famine consumes the Earth as massive dust clouds blanket the inhabitable regions of the planet. People are growing ill from the prolonged exposure to the dirt, crops are dying one by one and within a generation there will be nothing left to feed anyone and the world will begin to die. It’s an ironic extinction event, the very ground that provides life is the very one that will wipe it off the planet. Cooper (Matthew McConaughey), a farmer and former NASA test pilot, does his best to keep his family fed and his crops growing. After an unexpected encounter with a brilliant professor and his daughter, Cooper is enlisted for a critical mission that will send him and his crew through a wormhole and into unexplored space in a search for a planet that can sustain life.

Jonathan and Christopher Nolan have written a fascinating, engrossing and often thought-provoking space opera that will likely draw comparisons to Stanley Kubrick’s 2001: A Space Odyssey. The Nolans take scientific theories of time and space and present them in a way that can be hard to wrap your head around yet still comprehensible in a rudimentary way. It’s not difficult for a viewer to get caught up processing the science especially when it’s being thrown out at a rapid clip but ultimately it doesn’t impede one’s comprehension of the narrative. In fact, watching some episodes of Cosmos beforehand can go a long way. The film not only explores deep space but the deep recesses of the human condition as well. Again, delving into those themes could be deemed spoiler-ish but those themes do represent the heart and soul of the film.

Nolan brings together a stellar cast of actors to bring this 169 minute epic to life. McConaughey gives another award-worthy performance as Cooper. You can really feel the, pardon the pun, gravity of the situation on his shoulders and the raw emotions that well up during certain scenes. Anne Hathaway is very good as Amelia Brand, a woman who on the surface appears cold but is quite vulnerable inside. Michael Caine is very effective as Professor Brand. John Lithgow fairs well in his brief appearance as Cooper’s father-in-law, Donald. Mackenzie Foy is particularly strong as Cooper’s daughter, Murph. The bond between father and daughter is very believable and often emotional and touching. There are other actors who appear in the film, such as Jessica Chastain, who deliver very strong performances but discussing their parts in the story can be deemed a spoiler.

The visual effects for the film are jaw-dropping and often awe inspiring especially when seen in 70mm IMAX. One particular effect that stands out are the robots, TARS and CASE. Not your typical looking robots but prove to be a very cool creation and a welcome addition to the pantheon of cinematic robots. Not to be forgotten is the sound design which is quite immersive; unfortunately, a bit overbearing in some scenes where dialogue is washed out by the aural chaos. Kudos must be given for the absence of any sound during outer space sequences. Hans Zimmer composes another solid score and Lee Smith did a great job of editing. Hoyte Van Hoytema did a spectacular job of lensing the film especially in regards to the familiar yet alien environments.

Interstellar is a very good science-fiction adventure. It is a somewhat flawed film especially when it comes to the final ten to fifteen minutes of the film. While it really doesn’t ruin the film it ultimately doesn’t hold the emotional impact it could have had if it ended at the moment that seemed to be the logical conclusion. At nearly three hours the film is never dull and moves along quite nicely. Well directed, written and performed it is certainly one of the better sci-fi films in recent years. While not in the upper echelon of the Nolan cannon it rests somewhere in the middle of the pack. It is certainly worth seeing and is best seen in the theatre and again ideally in 70mm IMAX.